The Great Lakes of North America is the largest group of freshwater lakes on Earth, holding 20% of the world’s surface freshwater. Careless pollution has made it a hazardous source of drinking water.

The 5 lakes began to form at the end of the last glacial period, 14 thousand years ago, as retreating ice sheets filled basins with meltwater. The basins had originally been carved by glaciers when the ice age began. 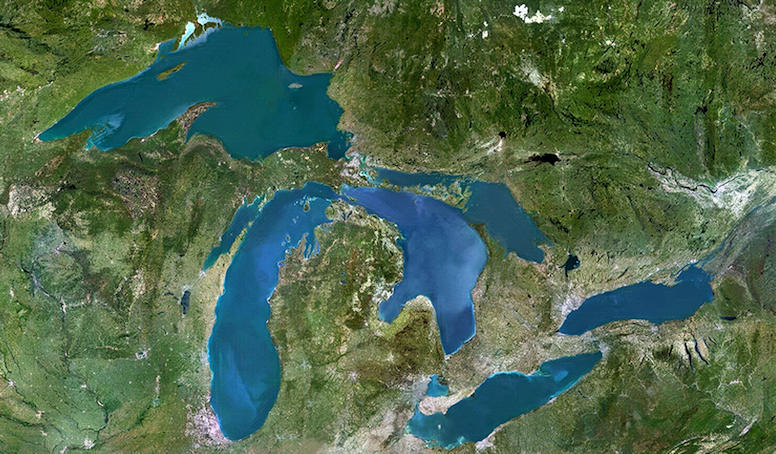 In the latter 18th century, to facilitate shipping, industrious men connected the lakes with each other, nearby rivers, and with the Atlantic Ocean: the sort of unnatural act that ambitiously defines industrialization. The result was an open invitation to invasive species, with the Great Lakes serving as a beachhead for all connected waterways.

20th-century urban development and industrial pollution degraded Great Lakes water to undrinkable by 1970. Factories dumped waste into waterways rather than treating it. Raw sewage was swilled in, fouling the water and causing algal blooms.

Beginning in 1972, the US and Canada belatedly agreed to prohibit the most obvious abuses to water quality – at great expense. Pollution is cheap. Sustaining Nature is expense.

Stringent limits were put on large point sources of nutrient pollution, like factories and wastewater. But smaller “nonpoint” sources, such as fertilizer and chemical runoff from farm fields and suburban lawns, went uncontrolled. These scattered effluents have since become major pollution sources.

Since the mid-1990s, climate-driven increases in rainfall have portered growing quantities of runoff into the Great Lakes. This rising load has triggered increasingly severe algal blooms, comparable to the pollution events of the 1970s.

Besides temporarily fouling the water, these blooms have long-term impacts on the lakes’ ecosystems. They deplete oxygen: killing fish and spurring chemical changes that prime the waters for worse blooms. Anoxic (low-oxygen) water is more corrosive and can damage water pipes, causing poor taste or foul odors, and helps release trace metals that are a health hazard.

There are technologies which can give Nature time to clean the lakes by limiting pollution input. But, to date, the US & Canada choose not to invest in a sustainable future for the Great Lakes.

Ishi Nobu, “The Great Lakes,” The Fruits of Civilization, BookBaby (2019).