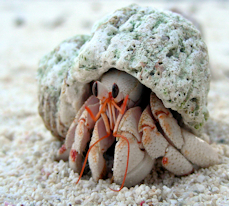 Hermit crabs are decapod crustaceans that live with a selectively selected mollusk shell covering their vulnerable abdomens. There are ~1,100 species which live in the seas and on land.

Hermit crabs protect themselves from predators by salvaging an empty seashell. Abandoned sea snail shells are popular among many hermit crab species. The tip of the crab’s abdomen securely clasps onto the columella of the chosen shell.

As an added precaution against becoming a snack, most hermit crabs are nocturnal.

The fit of a shell is important to safety and mobility. Some crabs hollow out and re-model their shells. That sometimes doubles the volume, providing more room to grow. It also makes for a lighter mobile home to lug around.

Hermit crabs require larger shells as they grow. Since gastropod shells may be in short supply, crabs may compete for choice shells.

The hermit crab is no hermit. Crabs regularly gather together for real estate swaps.

A crab that finds a suitable shell, albeit too large for it, waits nearby rather than walking away. Soon enough another crab comes by, then another.

A congregation of 3 will attract dozens more, all eager to trade up to a larger home. They typically form a conga line, small to large, each holding onto the crab in front of it.

Once the largest crab moves into the vacant shell, from large to the small, each queued crab quickly scuttles into the shell in front of it.

Crabs spend hours queuing up. Once swapping starts, a synchronous vacancy chain fires off in seconds, like a line of dominos.

Vacancies don’t just come via a convivial conga line. Hermit crabs sometimes gang up on one with a fine abode, prying it out of its home, and then competing for the better shell.

Having diligently worked to remodel its home, a crab is reluctant to leave it for any reason, including making love. Male hermit crabs have specialized private parts that help them keep their private property. Some males have penises that are 60% as long as the rest of their bodies. “Enlarged penises evolved to prevent the theft of property during sex. Species carrying more valuable, more easily stolen property have significantly larger penises than species carrying less valuable, less easily stolen property, which, in turn, have larger penises than species carrying no property at all,” opined American hermit crab penis expert Mark Laidre.

Hermit crab funerals are well attended. Crabs come from all around, not to mourn the deceased, but in the hopes of a shell upgrade.

Some hermit crab species forgo shells for sea anemones. A crab plucks a young anemone off the sea floor and places it on its belly. The anemone attaches, attracted to free meals from scraps that float free when the crab eats.

The crab benefits because the anemone grows up and over the crab’s otherwise unprotected back. Meantime, the anemone’s fleshy foot provides protection to the crab.

Some hermit crab species accommodate each other by preferring distinctive shells. The strawberry hermit crab and ruggie hermit crab sometimes share territory on beaches across the Indo-Pacific region. Ruggies prefer short, globular shells while strawberry crabs go for elongated shells with narrow aperatures. “The preferred shell morphology of the ruggie hermit crab maximizes reproductive output at the expense of protection, while the preferred shell morphology of the strawberry hermit crab maximizes protection against predation at the expense of reproductive output,” observed German animal ecologist Sebastian Steibl and Christian Laforsch.

The strawberry hermit crab is notably resourceful in keeping a supply of water in its shell. A seashore crab, the strawberry returns to the sea at night to replenish its water supply. The crab retains a mixture of saltwater and freshwater to suit itself. On a hot day, a strawberry crab buries itself in the sand to stay cool and moist, if need be drawing into its shell and closing the aperture with its claws.

Accommodating adaptations among species illustrates how the localized force of coherence which guides evolution favors survival of diversity.