From time immemorial, man has desired to comprehend the complexity of nature in terms of as few elementary concepts as possible. ~ Abdus Salam 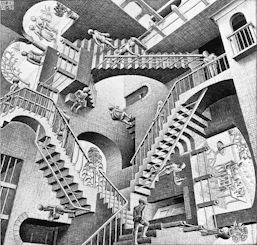 In 1919, Theodor Kaluza though it would be an interesting exercise to rewrite Einstein’s recent general relativity equations in five-dimensional form. Adding the extra dimension expanded the domain so as to contain both Einstein’s theory of gravitation and Maxwell’s theory of electromagnetism.

Kaluza sent his paper to Einstein, who liked the idea, but could not accept the extra dimension as representing reality. Einstein did not even realize the dimensional implications of his general relativity theory.

Relativity required five dimensions. Gravity cannot be a distortion of spacetime in 4d, as there would be no way for the distortion to manifest.

In a one-dimensional universe, a straight worm is fully in view, but a curved worm looks like dashes; the distorted portions outside the one-dimensional domain. The curve of the worm can only be seen on a two-dimensional plane. An extra dimension is needed to unify the view of the worm.

The quest by physicists for a unified Theory of Everything has inexorably resulted in models that posit higher dimensions. String theory and M-theory both do so.

Yet the majority camp embrace a quantum mechanics that studiously ignores the prospect of extra dimensions. The sycophants of the Standard Model are presently preoccupied with their hunt for the Higgs boson, which will only be one more brick in the wall that is but a façade.

Physicists are conservative; uncomfortable with what has no prospect of direct confirmation. Higher dimensions beyond the reach of the existential leaves a mental itch that can’t be scratched.

Then there is the comprehension problem.

The observable cosmos as a shadow play is discomforting only to those insistent that the world ultimately appear in black-and-white, or at least swaddled in distinguishable shades of gray. Embracing a reality of holistic dimensionality comes with a cloak of mysticism. But that is exactly the worldview that needs acceptance – that there is something beyond the tangible inherent in the fabric of reality.

Physics simply cannot progress without a wider vista of understanding about the nature of existence. That requires extra dimensions.