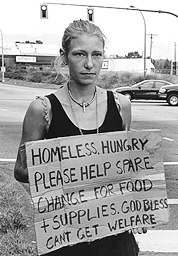 At bedtime on any given night in the United States, 650,000 people have no place indoors to sleep. The U.S. military-industrial complex consumes at $700 billion per year, 19% of the federal budget, and 5% of gross domestic product, but the country cannot afford to take care of its own people. Instead, homelessness is increasingly being criminalized.

U.S. cities are increasingly passing measures to make homelessness a crime. Berkeley has  on the November ballot a measure to ban sitting and lying on sidewalks from 7 am to 10 pm, at the risk of a $75 fine.

Retail shop owners find the great unwashed bad for business; not only for not being paying customers, but for scaring ones who would pay away.

Ultimately the problem is a social and economic regime that rewards and subsidizes those with money, while burdening workers with high taxes, and trying to make disappear those who cannot make a decent living.

The rubric of capitalism is paying for only as much compassion as makes for good marketing. Meanwhile, the government’s primary concern is maintaining the state’s own power.

Democracy has long been largely by the moneyed and for the moneyed. It is becoming more so. The Supreme Court’s sanction of unlimited spending for election campaigns is a neon billboard for getting all the democracy you can afford.

California pioneered direct democracy in the early 20th century. This populist initiative has turned into a plutocratic tool. 4 of 11 ballot measures to be voted on in 2012 were paid for by very deep pockets. Other measures inimical to moneyed interests are being fought with wads large enough to pay for meals and hotel rooms for all the homeless in the country until the next election.