The heat waves happening across the world this year are just a warming up of what’s to come. The most profound aspect of events is how nothing is being done to adapt.

2020 is the hottest in history: a decided trend that will rapidly accelerate in the years to come. A brief look at global events portends a dismal future.

An unusually warm and dry winter turned Siberia into a tinderbox this spring. Fires have raged across the vast boreal forest there since early spring and continue to do so. There has never been such a hot, devasting summer in Siberia as this year, with temperatures 30 °C above 20th-century average. Further, the conflagurations there will help accelerate global warming in a self-reinforcing cycle: from the fires and their emissions, loss of vegetation, permafrost melt, and sea ice decline.

India has had record heat waves this year, along with widespread water shortages. Several cites there had temperatures approaching 50 °C (122 °F). In May, a cyclone ravaged the coasts of eastern India and Bangladesh. The northeastern states had floods from epic monsoon rainfalls; this while southern India sweltered in drought. Meanwhile, massive swarms of locusts destroyed crops across a wide swath of western and central India.

Europe has had prolonged heat waves this year, with temperatures at 14 °C above 20th-century average. “When a heat wave lasts for this kind of duration the impacts can be compounding,” remarked meteorologist Taylor Ward. “Many homes across the region don’t have air conditioning. The buildings can’t cool down, putting people at risk, especially the elderly and those with health conditions.”

Nuclear power stations in France and Spain have been forced to cut output because the river water normally used to cool reactors is too warm. Low water levels in Italy’s River Po affected hydroelectric supplies, prompting power shortages in Rome that knocked out air-conditioning and left people trapped in elevators.

Up to 20% of Poland’s grain harvest is likely to be lost this year from scorching temperatures and drought. Poland is not alone. Germany is facing crop losses of up to 50% in the worst-hit regions. Other European nations also face paltry yields from their fields.

There have been numerous forest fires across Europe, as far afield as the French island of Corsica in the Mediterranean, the Czech Republic, Finland, and Sweden.

In the US, California has been ablaze. The wildfires this year are a worsening of a trend that has accelerated this century. “Fires are really responsive to warming. With just a little bit of warming, we’re seeing a lot more burning. We have twice as much burning now as we were seeing in the early 1980s,” observes fire ecologist Jennifer Balch. 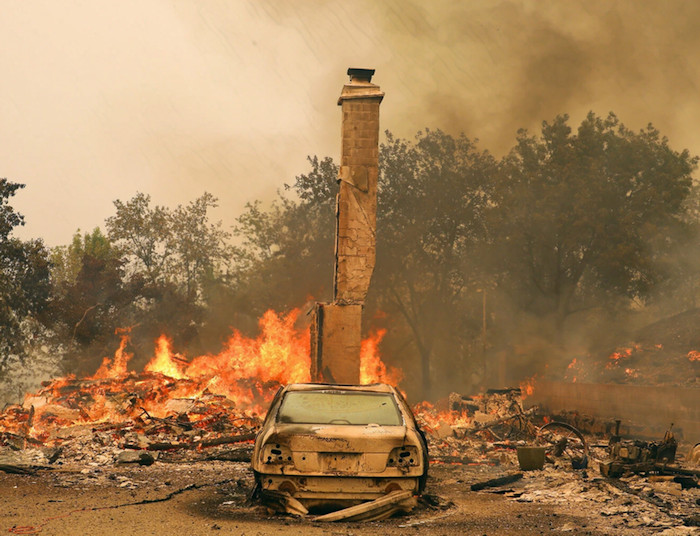 Then there is the unrelenting heat wave in California, which has pushed the electric power grid there to the brink of collapse. There have been rotating power outages across the state. This owes to poor planning by the privately owned electric utility there – just a tiny example of how unfettered capitalism is grinding the United States down.

The US Midwest and east coast also suffered widespread power outages from storms this year.

California is not the only state on fire. Colorado also has raging wildfires scorching through forests while half the state experiences severe drought.

The oppressively hot and relentlessly dry conditions in Western states are the result of a massive “heat dome”: a stubborn fortress of high pressure that is sucking moisture from the soil and preventing clouds from forming. With warming both the atmospheric and marine currents are shifting and slowing, resulting in prolonged thermal intensity.

In the Atlantic Ocean, a marine heat wave and slower currents promise an active hurricane season this year, with the likelihood of intensely damaging storms. “With warmer water there is just more energy there for the storms,” said oceanographer Glen Gawarkiewicz.

Although cyclones, wildfires, and flooding from storm water strike more fear and generate more news headlines, extreme heat is a far more deadly force of Nature. The storms and wildfires may come and go, but the temperature worldwide is headed in one inexorable direction: up.

This year is merely a hellish harbinger of what Nature is rewarding humanity with for its unsustainable industrialization. It’s going to get much worse as the decade wears on. Yet the urgent need to take extensive mitigating measures to limit loss of life is not even on the political agenda anywhere.

Money is power, and the vested interest of the moneyed class is to maintain the status quo: to keep raping Nature and exploiting the working class – the vast majority who are too clueless to revolt and create equitable societies.

The United States has not only relinquished its world leadership role but is now actively accelerating polluting its people and decimating Nature. There has been no check on Donald Trump, the demonic despot of that declining nation.

With its strongly autocratic government under Xi Jinping, China is best poised to lead by example. Instead, China is plowing ahead with more industrial development and further devastation of ecosystems, notably along its coasts. Environmental preservation barely gets lip service in China.

European politicians make a few speeches each year that acknowledge climate change, but they prefer kicking the response can down the road, leaving any meaningful measures to successors.

2020 has been the year of a relentless cold virus called covid. With rare exception, governments around world have shown their ineptness, beginning with failure to properly recognize the hazard for what it is: a generally mild disease striking down those out of shape and otherwise in poor health, to best be countered by compassionate coordination which has been in scant supply. Along with rational holistic analysis, what has been lacking has been humane coordination.

Lack of savvy, competence, and discipline are going to wipe the human race out, along with the mass extinction of much other life – a culminating, sordid display of greed abetted by technology overrunning judiciousness. World civilization will collapse by 2070: humanity going down without a fight, perhaps save some pathetic response near the finale, mid-century. As the mythical Forrest Gump observed, “stupid is as stupid does.”