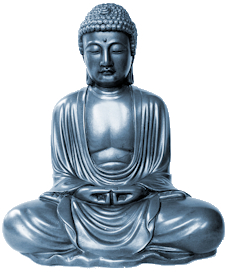 Enlightenment is where you want to be. Here’s how to get there.

You rely upon your mind to get you through life’s adventure. Yet all the woes of life come from your mind: the fear, the worry, the depression, the anxiety.

Contrastingly, thoughts and emotions which arise as conscious intrusions need to be eliminated for peace of mind. Whereas the subconscious is a tool, nattermind only makes you suffer.

Enlightenment is a state of consciousness with a quiet mind: quietude. To get to quietude, you must silence nattermind. Refuse all thoughts, all emotions, all interjections into awareness – without exception. Live in a transcendental mental state, beyond thought. Witness all before you, including your own being.

Hard to do, yes. But it can be done. With practice, the craft gets easier. And unless you subdue nattermind, your suffering will continue.

Half measures won’t do. There is no middle ground. Either you are a slave to nattermind or you liberate yourself and thereby enlighten yourself.

We are creatures of habit. Attaining quietude is simply a change of mental habit. To help you change your mental habit of letting nattermind run your life, practice meditation.

The singular aim of all “spiritual” practices is to quiet the mind. For some, intense focus while awake works. Yoga is such a practice, via concentration on bodily movements and awareness. There are many other focusing practices but are all inefficient and less efficacious than a pure meditative praxis.

Sit comfortably. Close your eyes. Relax. Calmly bring your mantra to mind. If a thought comes to mind, dismiss it. Go back to your mantra.

Traditionally, a mantra is a 1- or 2-syllable meaningless resonance that serves as a focal point during meditation. A mantra is like a mental breath. You could use your breath or heartbeat as a mantra, but common practice is a chosen resonance.

Your mantra may be any soft “sound.” “Ōm” is the classic Buddhist mantra. “Ah-so” suffices, as does “ē-ma.” The bottom line is that whatever works for you as a mental focal point is a decent mantra.

With the intention of transcending to mental silence, you will succeed. Even if you do not notice, you will momentarily transcend during meditation and get some rest. With practice, transcending becomes as easy as falling asleep.

Meditate in the morning for 20 minutes after you wake up. If you can, mediate in the afternoon before supper. If 20 minutes doesn’t work for whatever reason, meditate for shorter durations. You can mediate at night if you are having trouble falling asleep.

Take a few minutes after meditating (with the eyes closed) to ease (back) into the awake state. As meditation slows the system, meditate on an empty stomach.

For more instruction on meditation and choosing a mantra, see Clarity: The Path Inside or Spokes 8: The Hub of Being.

The benefit of meditation is that it habituates quietude and thereby facilitates nattermind subduction.

To have any real chance of enlightening yourself, you must not feed your mind. Soak in silence.

Social butterflies are weak candidates for enlightenment, as chatter binge-feeds nattermind. Don’t compete. Don’t argue. Don’t seek thrills. Be as quiet as you can and enjoy life.

Don’t dim your consciousness with mind-altering garbage such as alcohol or cannabis. The aim is sensitive clarity, not boorish stupidity.

Living well is a skill. Getting to enlightenment is the ultimate craft.

If the discipline is too much for you, you’ll suffer what your nattermind dishes out. Sorry, that’s just how it is. You either swim in a sea of silence, blissfully enjoying the experience of life, or drown in the noise of nattermind.

That’s all you need to do to maximize your potential: silence nattermind and witness life. Living in meditation is all that spirituality is.

Note that nattermind can never be completely squelched; it is part of your mind, after all. But nattermind can be quelled to a minor nuisance and a sometime entertainer.

You’ll naturally have questions. For why mental life works as it does, and to get the big picture about existence, read Clarity: The Path Inside.

If you are consumed by thoughts and emotions, you’re not really living: you’re slowly being eaten alive by your nattermind.

Enlightenment is mental health. A lesser level of consciousness is mental illness. The distinction is that stark.