There are innumerable proofs that the material world is a mirage of the mind. Hydra regeneration from complete dissociation into individual cells is one.

A hydrozoan is a small, tubular cnidarian with an adhesive foot and tent/the-mechanics-of-existence/acles (cnidae). To gain insight into nervous system reassembly, marine biologists Jonathan Lovas and Rafael Yuste tore apart hydra and watched them put themselves back together, which they did. “Animals in all experiments eventually regenerated to yield normal hydranths.” 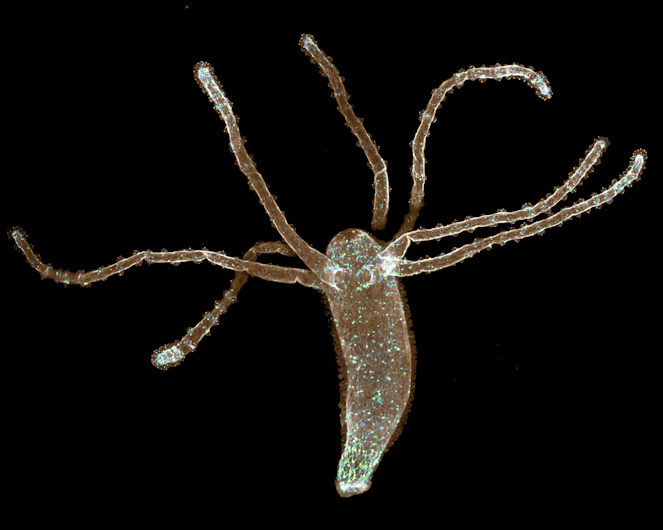 Lovas and Yuste theorized that “modularity plays an essential role in evolution, as the compartmentalization of components of a system allows their independent optimization.” This follows on the observation by Russian evolutionary biologist Alexander Badyaev: “In modern complex organisms, novel adaptations result mostly from reorganization of existing structures.”

But, by the preamble “in modern complex organisms,” Badyaev did not look far enough. To self-evolve, viruses manipulate macromolecules into novel forms so as to better infect. For viruses to do so necessitates profound intelligence: understanding how the cells they seek to infect respond to viral incursions, then problem-solve around that.

Even though mechanics are all that may be observed, hydra regeneration cannot be explained by mechanical (physical) means. There must be a localized, intelligent force of coherence behind the reassembly. That much is obvious – or, at least, should be.

The one and only thing we know for certain is that our individual consciousness witnesses the continual productions of an attendant mind. Ironically, that we consistently make sense of the symbolic representations presented is an inscrutable miracle. As physicist Albert Einstein marveled, “The most incomprehensible thing about the world is that it is at all comprehensible.”

No one throughout history has ever been able to explain how the body and mind interface. What the bridge might be between the material and immaterial – physical and mental – is unimaginable.

Either matter creates the mind or the mind creates matter. There is no possible explanation for how matter does anything without invoking the concept of energy. And energy is just an idea, without substance. That leaves only one possibility: the mind creates physicality from data fed to it by a universal field of coherence.