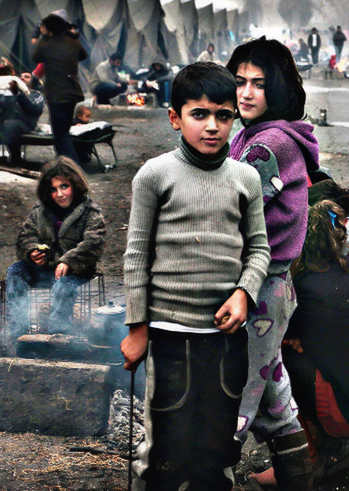 The intermingling of peoples defined the diaspora of humanity now seen around the world. The United States and Australia were populated in modern times entirely by immigrants. Europe too became an intermingled mosaic.

In the 21st century, humanity became more ignoble. Democracies – which are the sinking of polity to the lowest common denominator – have pronouncedly become cruel to those seeking haven.

A civil war began in Syria in 2011 to overthrow the oppressive leader there, Bashar al-Assad. al-Assad used internationally banned chemical weapons on civilians to suppress the rebellion. A gutless US president, Barack Obama, issued a hollow threat to al-Assad but did not intervene, betraying his public promise to do so. As an outcome, Syrians flooded out of the country.

Europe was deluged with a refugee wave that hit in 2015. Thousands entered Hungary en route to Germany. Hungary’s prime minister Viktor Orban built a fence along the country’s southern border to stop them. The European Commission chided Orban: “We have only just torn down walls in Europe; we should not be putting them up.”

5 years later immigration had again become a bother. But the response by European officialdom by then had soured. When migrants trying to reach Europe on a dinghy were met by a Greek vessel, the crew hit the boat with sticks and fired warning shots at them. Ursula von der Leyen, the president of the European Commission chimed, “I thank Greece for being our European aspida [shield] in these times.”

Contrasting moral visions conflicted the European response in 2015. One was the humanitarian Willkommenskultur: the Germanic culture of welcoming foreigners. The other was of meaner men.

Through fatigue of dealing with refugees, by 2020 the hardliners had won. Brutality at the border is now a central feature of European migration policy. Misery for refugees is no accident. Greece now has overcrowded concentration camps for those unfortunate enough to make it to that country.

Anyone who makes it out of Greece is liable to be beaten up by police at the Croatian border, who pummel and rob migrants before dumping them into neighboring Bosnia.

Tactics that were once the demands of a nationalist fringe have been adopted by mainstream European governments. Non-governmental vessels in the Mediterranean which would assist migrants have been impounded and their crews harassed.

Though some officials morally wrestle with the hardline inhumanity, most are happy to justify it. Brutality at the border is a necessary evil for convenience in the interior goes one argument.

In the US in 2016, a demagogue outsider bested mainstream politicians to become the Republican party nominee for president. Donald Trump called Mexican immigrants “drug-dealers and rapists.” “These aren’t people. These are animals,” Trump proclaimed.

Trump conned his way into office. Within 2 years of becoming president he had set up concentration camps where immigrants were housed in harsh conditions. Young children were separated from their mothers. Few Americans were outraged, and the American legislature has passively let the evil fester.

Australia had for decades fueled economic growth by welcoming skilled foreigners. In 2019, Australian prime minister Scott Morrison unveiled his plan to pummel immigration. “This is about protecting the quality of life of Australians,” Morrison intoned.

By this time, Australia had already set up a refugee camp on the remote Pacific island of Nauru, where hundreds were detained for years. Confused and frightened, children suffered sorely. “Childhood shouldn’t be like this,” lamented psychiatrist Natalia Hverta Perez who visited the camp.

As climate change drives desperation, huge waves of refugees will crash upon foreign shores. Their reception will be what humanity has morally become. The snapshot taken now does not portend a pretty picture.

“Europe hopes brutality at the border will keep refugees away,” The Economist (12 March 2020).

Damien Cave & Isabella Kwai, “Why has Australia fallen out of love with immigration?,” The New York Times (22 April 2019).

Gregory Korte & Alan Gomez,”Trump ramps up rhetoric on undocumented immigrants: ‘These aren’t people. These are animals.‘,” USA Today (16 May 2018).