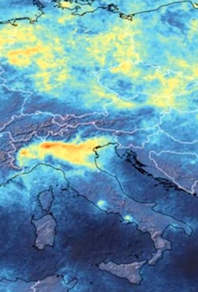 Disease and pollution have long been linked in people’s minds. The word “malaria” means “bad air” in Italian.

In the late 5th century BCE, hypothesizing about a plague that swept Athens, Greek historian Thucydides posited the idea of infection. This ran counter to miasma theory, popular from antiquity in both the East and West. Miasma theory held that diseases owed to bad air, also known as “night air.” The germ theory of infection supplanted the miasma theory toward the end of the 19th century.

Italian biochemist Leonardo Setti wonders whether air pollution had a hand in Italy’s Covid-19 epidemic. Accounting for the virus’ incubation period, Setti found a close correlation between the rapid spread of Covid-19 in the wide Po valley in northern Italy and particulate pollution levels there. Covid-19’s course in other, less polluted regions of Italy have been slower.

An alternative explanation for this correlation might be that airborne particles increase susceptibility, rather carry SARS-Cov-2 itself. Either way, lockdowns may abet containment by reducing airborne-particle pollution.

“Airborne particles may be assisting the spread of SARS-CoV-2,” The Economist (26 March 2020).