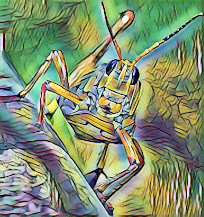 By far the most varied and abundant of animals, insects are vital to the biological integrity of macroscopic life on Earth: serving as pollinators of plants (and their corpses fertilizer), food for many animals (notably birds), and ecosystem cleaners.

People represent just 0.01% of all life. Yet, since the dawn of civilization, mankind has eliminated 83% of other wild mammals and half of plants.

The toll on insects was not especially grievous until the widespread application of synthetic insecticides in the mid-20th century. At the beginning of the 20th century, insects collectively outweighed human by 20 times. By the end of the century, that margin had fallen to 17 times – a ratio which has worsened in the past 2 decades. While humans continue to proliferate, world insect populations have been cut in half in the past half-century.

Insect loss has been driven by habitat destruction, pesticides, and light pollution. Climate change, including rising carbon dioxide levels, are reducing the nutrients in plants. This alone has cut herbivorous insect numbers considerably. The recent decline of grasshoppers is exemplary.

The decimation of insect populations has been especially pronounced in lands which humans use. More natural areas have not had such precipitous declines.

Humanity’s fate will fare no better than the little 6-leggers. The prospects increasingly dim at an accelerating rate.

“For a long time things can seem okay and then suddenly they’re not” said English ecologist Alex Pigot. “Then, it’s too late to do anything about it because you’ve already fallen over this cliff edge.”