Insects are the only invertebrates that evolved flight. Their wings are a marvel of engineering skill.

Insects first flew some 350 million years ago, during the Carboniferous period. Vast swaths of forest lushly covered the land, raising oxygen levels to 35%. Amphibians were the dominant land vertebrate, feeding on the copious invertebrates that covered the forests.

Like other animals, insects need oxygen as respiratory fuel. Insects breathe through a bodily gas exchange system that acts as an oxygen sponge: using external valves (spiracles) to pipe air into a mesh of tubes (tracheae) which absorb and transport oxygen, and release carbon dioxide as metabolic waste.

Because the insect respiratory system is splendidly based on surface volume, insects can readily scale in body size depending on oxygen availability. The rich oxygenation of Earth’s atmosphere during the Carboniferous allowed insects to evolve to tremendous size.

Size was one competitive advantage at a time when arthropods were thick on the ground. Flight evolved as another vying edge, both as a defensive measure – being able to quickly flee – and as an opportunity for better foraging. Besides the crawling congestion of critters, towering trees were another inspiration to take wing: providing in the skies a source of both food and refuge.

Wings likely evolved from structures which already had nerves, joints, and muscles employed for other purposes. Evolution is adaptation: augmenting and crafting existing arrangements into new structures and mechanisms.

Insect wings are exoskeleton outgrowths. There are commonly 2 pairs: forewings and hindwings, though a few insects lack hindwings.

Biological flight has severe design constraints, with weight being the most obvious (beyond the extraordinary demands of flight itself). Wings evolved to meet the demands of flight and the needs of exposed tissue subject to extreme wear and – like skin – an invitation to microbial infestation.

Like many biological innovations, wings independently evolved numerous times. This is indicated by assorted designs which convergently meet selfsame requirements. Butterflies, dragonflies, and cicada, for instance, have divergent wing structures, including the way nanostructures are composed and arranged as well as distinctive chemical compositions.

Chemist Jessica Román-Kustas explains that “a cicada wing is an ultrathin membrane reinforced with a network of tubular sclerotized veins that contain trachea, blood vessels, and nerve fibers. The membranous areas of the wings, enclosed by the veins, are cells that are composed of closely appressed dorsal and ventral surfaces, both consisting of at least 3 distinct layers organized – from innermost to outermost – as the procuticle, the inner epicuticle, and the outer epicuticle.”

The innermost procuticle is a specific array of proteins, combined with chitin in some species. Proteins are the labor force of all living cells. Chitin is a complex polysaccharide that is the primary component of cell walls in fungi, fish scales, cephalopod beaks, and the exoskeletons of arthropods such as crustaceans and insects.

The outer epicuticle comprises intricate matrices of lipoproteins and fatty acid chains. These materials have low surface energy due to their nonpolar, hydrophobic nature. Such materials, arranged as they are, manage water contact and dismissal.

Cicada wings include highly ordered nanopillars in their epicuticles which reinforce structural integrity and perform other functions (including skewering microbes). Contrastingly, dragonfly wings display a hidden order among irregular nanostructures. This ostensible disorder limits damage incurred on one spot on a wing from propagating to other parts of the wing via vibratory mechanical stress.

The epicuticle of some insects is covered in protective waxes to preserve a precise moisture level and supplement mechanical strength.

The cuticle membranes of insect wings are subject to cracking. Yet grasshoppers and locust fly for days, over deserts and oceans, on wings 10 times thinner than a human hair. The wings withstand hundreds of thousands of beats. 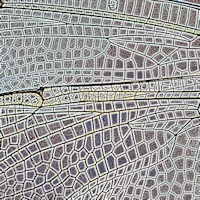 Wing cracks are contained by the veins that crisscross each wing, segmenting a wing into hundreds of pieces. Veins acting as crack barriers increase wing durability by 50%.

Wing veins are heavier than the cuticle membrane. There is a mathematically ideal ratio between the protection that veins provide versus the additional weight they impose. Insect wings possess the optimal trade-off between lightweight cuticle membrane segments and vein patterning. Insect wings are a miraculously ideal adaptation.

The outer epicuticles of insect wings obtain their bactericidal properties by having spikes which skewer bacteria. Nanopillars have precise smoothness and stiffness to pull a bacterium down toward the epicuticle surface and then puncture the bacterium’s cell membrane. The exact mechanism of impaling bacteria varies among the wings of distinct insects. 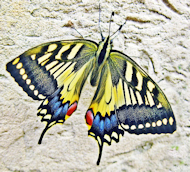 Evolution proceeds toward distinct goals of functionality. As insect wings exemplify, biological designs incorporate considerations of quantum effects in atomic and molecular reactions, along with architectural structures that produce the exact attributes needed for requisite functionality in a chemical form that can be manufactured during development and is sufficiently stable for its intended life cycle, with fault tolerance to boot. The natural force of coherence creates exquisite designs aimed at multifarious tradeoffs in function, economy, materials, and aesthetics – for Nature has an eye for beauty as well as utility, as butterfly wings amply illustrate.