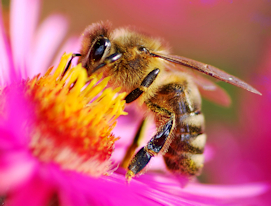 A recent study of insecticide use on American crops found that these biocides have become more toxic to honeybees in the past few decades despite significantly lowered application rates.

American environmental ecologist Maggie Douglas and colleagues studied the specific effects of insecticides on honeybees from agricultural application 1997–2012. Separate estimates were made for contact-based toxic loads, such as when a bee is sprayed directly, and oral-based toxic loads, when a bee ingests the pollen or nectar of a plant that has recently been treated.