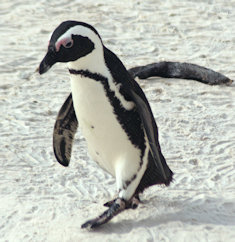 Sociality is an exercise in communication. Nature inclines organisms to certain universal principles of social interchange, as researchers discovered when listening to jackasses talking.

The jackass penguin, also known as the Cape penguin, is a flightless bird native to southern African waters. This penguin lives at sea – its body streamlined, with wings stiffened into flat flippers. Adults may weigh over 3 kilos and stand 70 cm tall.

This penguin is called a jackass for the sound of the calls it makes: a loud, wheezing bray that sounds like a donkey in distress. Several related penguin species native to South America have selfsame calls.

Researchers found that jackass penguin calls have sonic elements which follow the same linguistic patterns found in human languages. The key principle is communication efficiency via compression: the most common expressions being short. “If you have compression in the communication system it is more efficient,” said British life scientist Stuart Semple.

“Information compression is a general principle of human language: the most frequent words are shorter in length (Zipf’s law of brevity) and the duration of constituents decreases as the size of the linguistic construct increases (Menzerath–Altmann law). Vocal sequences of non-human primates have been shown to conform to both these laws, suggesting information compression might be a general principle,” reported Italian biologist Livio Favaro et al after studying jackass penguin talk.

From the mid-1930s, American linguist George Kingsley Zipf (1902–1950) popularized the idea that the more frequently a word is used, the shorter that word tends to be. French stenographer Jean-Baptiste Estoup (1868–1950) and German physicist Felix Auerbach (1856–1933) had noted the same phenomenon a couple of decades earlier.

The Menzerath–Altmann law is named after linguists Paul Menzerath and Gabriel Altmann (1931–), who noticed in ~1980 that the longer a common communication construct (sequence) is, the smaller its constituents tend to be. For example, the longer a sentence – in terms of number of clauses – the shorter the clauses (in number of words).

Several simians are known to have efficient communication languages. The penguin study was the first to have looked for this in birds.

Genetic expressions have also been found to follow the Menzerath–Altmann law. As economy appears a conserved principle in evolution, that communication languages are typically efficient is unsurprising.

Alvaro Corral & Isabel Serra, “The brevity law as a scaling law, and a possible origin of Zipf’s law for word frequencies,” arXiv (31 December 2019).