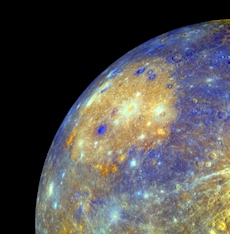 The solar system’s innermost planet has the most eccentric orbit. It wobbles around the Sun every 88 days, with one-and-a-half rotations during that time. Mercury’s temperature range is also the most extreme: from 700 K during the day to 100 K at night. Yet it likely has life.

NASA’s Messenger spacecraft is the first to probe Mercury. It found organic material on the surface, deposited long ago via bolide deliveries. Comets brought water, as they did to other planets. Mercury’s mantle has its fair share of slosh.

Mercury is heavily cratered from impacts. Several are over 200 kilometers in diameter. But the smaller ones are those that dug the deepest holes.

These impact pits hold ice, and, when heated, water. At some depth in the craters are temperature zones, which waver in temperature, though nowhere near the extreme swings on the surface.

The power of coherence that turned organic materials into life on Earth may well have worked the same magic to bring primitive life to Mercury in these temperate zones.

The earliest life on Earth metabolized by hydrogen and simple chemical reactions. Those same material dynamics would be readily available on Mercury.

Life’s foothold on Mercury would be in such small niches that humans will never find it. The folks on Earth are not going to be around long enough, as they have been very busy destroying life on this planet, including their own. Climate change crises will grow while space programs are curtailed. Earth is quickly becoming mankind’s final frontier.