The world is not as it seems – both a spiritual statement and what can be said looking at commonly used global maps.

The art of map-making – cartography – dates to antiquity. Global map projections present compromises between distorting the angles of latitude and longitude lines and the relative sizes of continents and oceans.

Syrian cartographer Marinus of Tyre founded mathematical geometry circa year 100 in the common era. His equirectangular projection maps meridians to straight vertical lines with constant spacing. This projection is neither equal nor conformal (preserving angles but not necessarily distances). 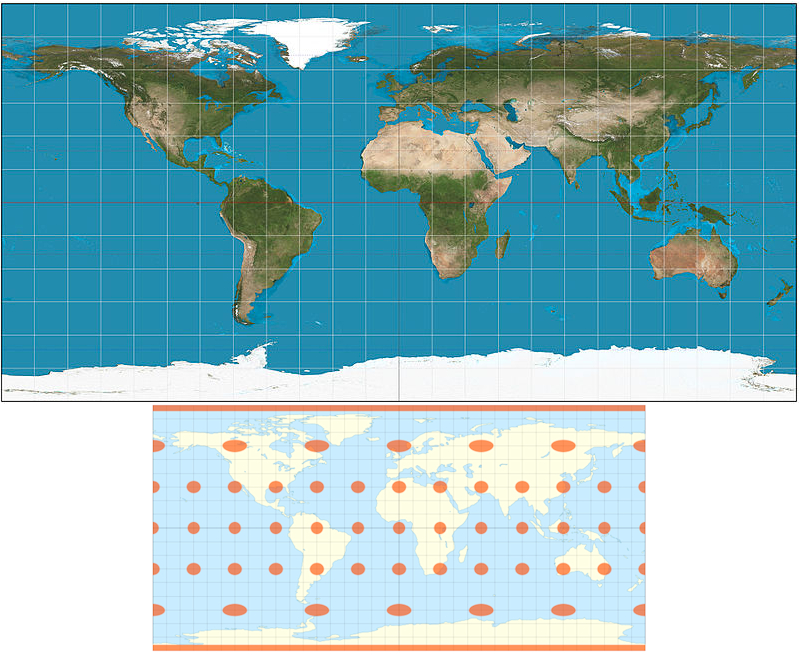 The standard classroom map is the Mercator projection, developed in 1569 by Flemish geographer and cartographer Gerardus Mercator. This map became the navigation standard because of its unique property of showing any course of constant bearing as a straight segment. Navigators like such a rhumb (course) because a ship can sail in a constant compass direction to reach its destination, eliminating course corrections. 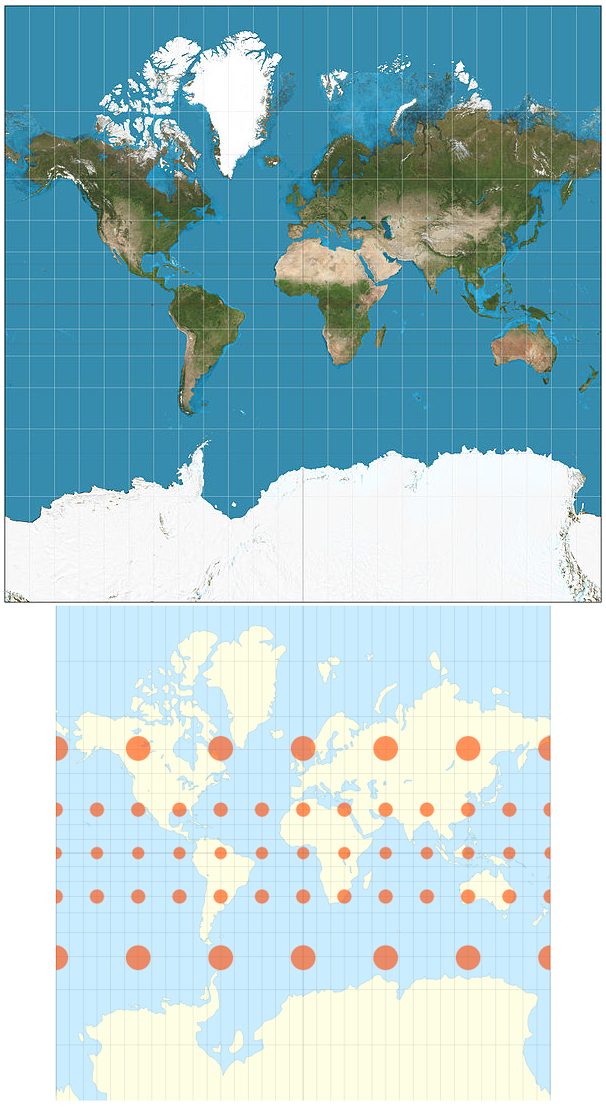 As a side effect, the Mercator projection inflates regions the further away they are from the equator. This makes Antarctica enormously envelop the south pole and shows Greenland to be as large as Africa. In actuality, Africa is larger than all of North America, and Antarctica is about the size of Australia.

For centuries, cartographer made numerous attempts to account for the distortions of the Mercator projection. Some projections were made for specific purposes, while others just tried to find the cartographic sweet spot.

The problem was so widespread that French mathematician Nicolas Tissot developed an equation in 1859 to quantify the degree of distortion that a map had. Tissot’s indicatrix places circles at regular intervals across a map. Distortion is determined by calculating how much each circle deforms. The map projections displayed here also show their equivalent Tissot’s indicatrix.

The Robinson projection was devised by Arthur H. Robinson in 1963 after an appeal from the Rand McNally company. Unlike other projections, Robinson had no geometric formula in mind. Instead, he used computer simulations to develop a table of latitudinal distances from the equator, then estimated longitude via interpolation. No other map projection employs such a technique. 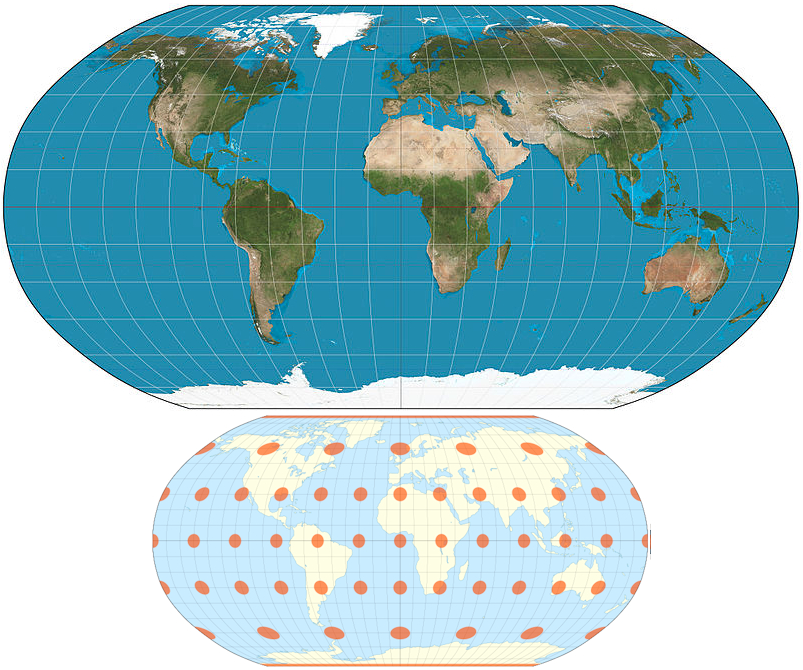 The Robinson projection is not conformal. Shapes near the equator or with 45° of the map’s central meridian show only modest distortion. Beyond this, shape distortion becomes increasingly severe toward the edges of a map. 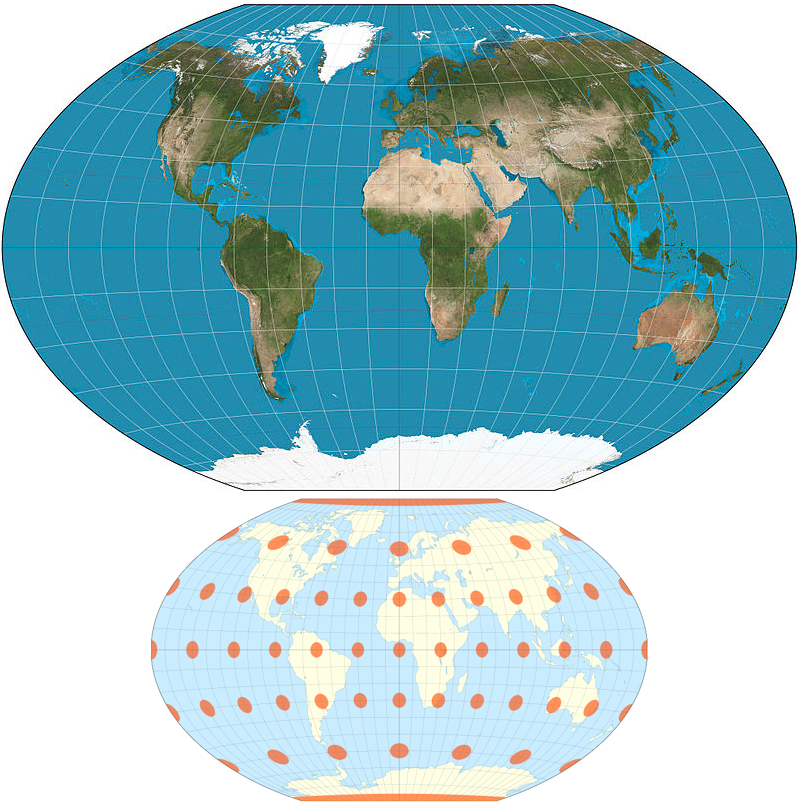 Johann Heinrich Lambert introduced 7 projections in 1772. One of them was a conformal conic projection, which conceptually seats a cone over the sphere of Earth and projects the surface conformally onto the cone. This Lambert projection became the standard for aeronautical charts because a straight line yields typical flight distances by approximating a great-circle route between endpoints. 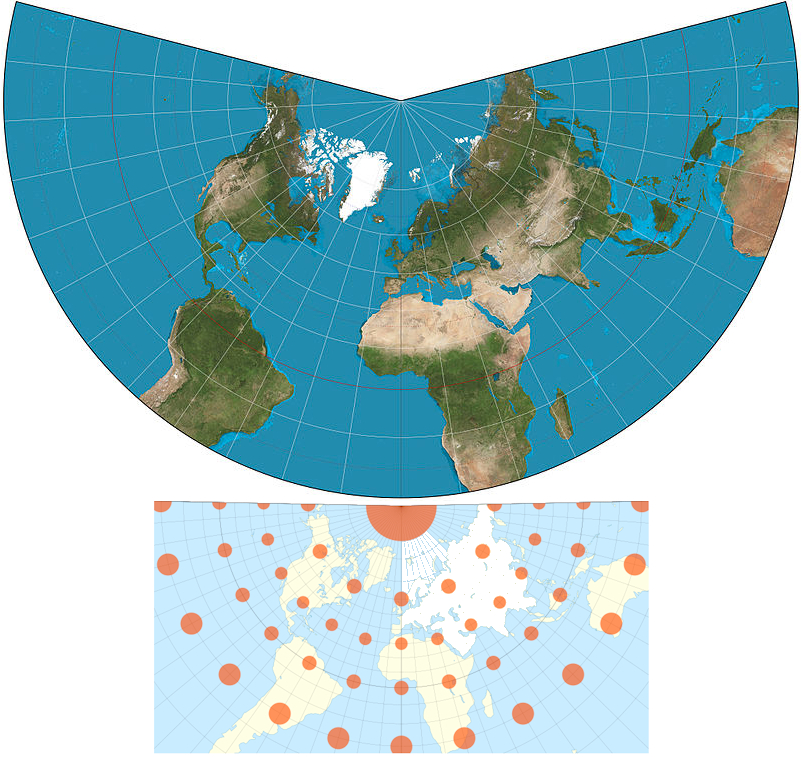 In 2016, Japanese architect Hajime Narukawa created a projection which broke the globe into 96 regions, folded into a tetrahedron and then a pyramid before flattening it into a 2-dimensional sheet. This multi-step transformation preserves the true dimensions of the continents by angling them outward instead of stretching them, maintaining the illusion of being laid out vertically per convention. This geographically accurate projection is called AuthaGraph, from authalic (ancient Greek for equal-area) and graph.