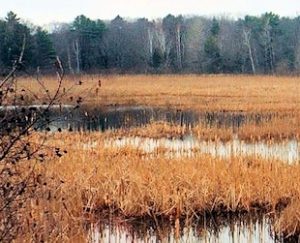 The three types of marshes are delineated by water quality: salt, freshwater tidal, and freshwater. Each type is home to different communities of species.

Salt marshes are the most challenging for plants, in having to accommodate high salinity. Salt marshes are important to the aquatic and terrestrial food webs, and in delivery of nutrients to coastal waters.

Plants form the foundation of marsh ecosystems. Grasses, reeds and rushes dominate marsh vegetation; establishing habitats for many invertebrates, fish, amphibians, waterfowl and mammals. The bioproductivity of marshes is among the highest of all biomes.

Marshes are a mosaic of extensive unvarying vegetation in patches of uniform composition, with sharp transitions over tiny topographic gradients. Different plant species have particular preferences for elevation based upon soil aeration and salinity.

It was long believed that plant distribution within a marsh was a passive adaptation. Instead, plants adjust their elevations by producing different volumes of organic soil, and by trapping and accumulating inorganic sediments. Each single-species community builds up the elevation of its substrate to a favorable range, much the way that corals do in the ocean.

Plants make a trade-off when colonizing within their preferential range: locating themselves slightly above the elevation of maximum biomass productivity. This gives the plants a safety margin of compensation for environmental fluctuations. A community hedges its bet by paying with a bit of productivity for greater long-term stability.

Populated areas of the world have already lost 90% of their wetlands, including marshes. Wetlands are drained to create agricultural land, or expand urban sprawl. Coastal development has been the major cause for loss of salt marshes.

Ishi Nobu, Spokes of the Wheel, Book 2: The Web of Life (pre-publication).