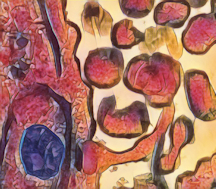 Viruses are wily. Measles is especially virulent because it erases the body’s defense system memory.

Measles is highly contagious. It can linger in the air or on surfaces for up to 2 hours, waiting to enter the airways of another victim.

Once inside, measles targets the immune system cells which remember how to fight viral infections, focusing on immune cells found in the mucus of the nose and throat, lung air sacs, and in the eyes. These are measles first residence before spreading to the deeper reservoirs of immune memory: lymph nodes, tonsils, spleen, thymus, and bone marrow.

Measles have entered lymph nodes 2 days after making their first incursion. 3–4 days after infection, blood vessels are carrying virus-laden cells throughout the body.

Symptoms don’t appear until 7–10 days after infection. Coughing, sneezing, and fever emerge as viral loads peak. At 12–14 days, measles celebrates its victory with red bumps across the skin. Memory immune cells have been depleted and may take up to 5 years to fully recover.

Measles is stealthy in not being too disruptive before it has already taken over. This lets the infected more easily spread the disease because they don’t feel sick. HIV and several other viruses also adhere to this stratagem.