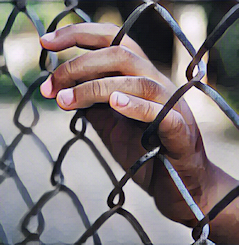 Humans have always been migratory creatures. Since prehistory, communities empathically accepted immigrants. In post-modern times, men ridden with the mental disease of unbounded self-absorption have had no moral qualms in denying the desperate a home.

Capitalism is an individualistic economic system which coddles the concept that greed is good. Capitalism begat societies which thrived on selfishness and grew comfortable with gross inequities. In believing that chaotic, ruthless, capitalism was the best mankind could do to organize itself, capitalism signified a severe sociopathic mental illness.

Societies ruled by those devoid of compassion and comfortable with destitution are a positive plague upon the planet. It is not incidental that these same societies are outsized destroyers of the natural environment. A mortifying glance at 21st-century America under Republican rule is exemplary.

Hardening attitudes about immigration illustrate why humanity is extinguishing itself. It’s bad enough that humans indulge in an economic system designed for environmental desecration on a horrific scale. A species that would let its own kind suffer and die when it could otherwise enrich and enliven all is an abomination.

To comprehend the evolution and triumph of hard-hearted and short-sighted men, read The Fruits of Civilization and The Pathos of Politics – available in hardcover, Kindle, and as an online flipbook.