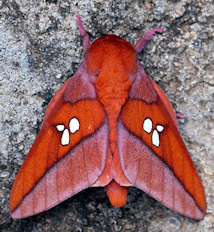 Many moths sport luxurious scale pelts which make them look like fuzzy butterflies. The fuzz evolved as acoustic camouflage.

Moths are typically nocturnal, as are bats. Many moths can hear at the ultrasound frequencies that bats use for echolocation. This allows these moths to detect when a bat is closing in and take evasive action.

Moths lacking such tuned-in ears may still gain protection from bat biosonar via acoustic camouflage: absorbing sound waves rather than reflecting them back as echoes. This takes exquisite adaptation. The thorax of a moth is bulky and hence acoustically reflective, thus making a moth an obvious target for a hungry bat.

Man-made sound absorbers consist of parallel fibers with air trapped between them. Rather than reflecting sound, sound waves enter these air pockets and bounce around, dissipating the acoustic energy.

Though following the same design principle, moth fuzz is a much better sound absorber than acoustic engineers can make – absorbing 67% of incoming sound energy. A bat has to be 9-18% closer to detect a fuzzy moth.