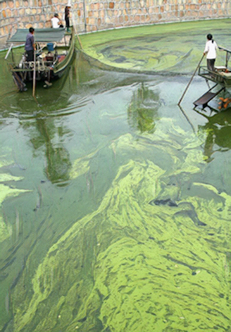 Carbon isn’t the only chemical causing climate conniptions. Excess nitrogen is an even more challenging catastrophe in the making.

Nitrogen is an essential building block for cells of all sorts. Plant growth depends upon it.

Nitrogen gas (N2) makes up 78% of the air, but its aerial form cannot be used by plants. Hence, plant-digestible nitrogen is an essential ingredient in fertilizer. The nitrogen in fertilizer is derived from ammonia.

The application of fertilizer is both costly and inefficient. The majority of applied nitrogen is nothing but environmental pollution: damaging the soil and running off in waters which flow through fertilized fields.

Oceanic dead zones are growing at an appalling rate, partly from massive algae blooms. The algae in many blooms are toxic, killing marine life and, in freshwater, poisoning drinking water supplies.

While carbon dioxide (CO2) has garnered the most publicity as a greenhouse gas, CO2 is modest compared to nitrous oxide (N2O). N2O has 300 times the greenhouse power of CO2 and lingers in the atmosphere for 120 years; whereas carbon hangs in the air for centuries.

Reacting with oxygen, N2O gives rise to nitric oxide (NO), which in turn reacts with ozone to break it down. Though there is scant nitrous oxide in the air, its contribution to global warming is considerable: ~10%. N2O gas output is rising at a faster clip than carbon emissions.

Over 1/3rd of N2O emissions are man-made. Nitrous oxide is generated by agriculture, industrial activity, and waste. The countries with the greatest nitrous oxide output are China, Brazil, and the United States.

Recognizing nitrogen as an environmental threat, in 2015 the Dutch government enacted a law to reduce nitrogen pollution by a mere sliver. Environmentalists lamented the gesture as lame. Meanwhile, farmers were outraged: repeatedly protesting en masse by parking their tractors where tractors should not be. These self-interested outbursts illustrate that solutions to the climate crisis must either be systemic or risk disruptive dissent which divides societies.

E. Sinha et al, “Eutrophication will increase during the 21st century as a result of precipitation changes,” Science (28 June 2017).

“World fertilizer trends and outlook to 2019,” Food and Agriculture Organization of the United Nations (2016).