Driven by the wind, the gyres of ocean circulation play a vital role in the marine biosphere and regulating weather & climate. Global warming is changing the way ocean gyres work.

Worldwide, there are 8 major wind-driven ocean currents: 3 in the Atlantic, 3 in the Pacific, and 1 each in the Indian and Southern oceans. 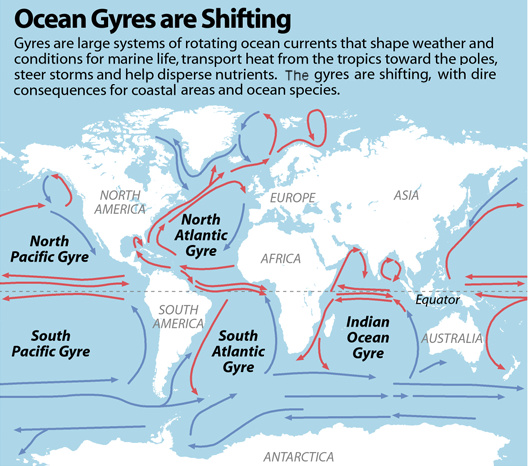 The eastern margins of subtropical gyres are characterized by cold water upwelling and cold eastern boundary currents. These currents provide nutrients for marine ecosystems, and help maintain cool, dry climates on nearby continents.

Contrastingly, at the western edge of subtropical gyres are boundary currents which carry warm water from the tropics poleward, contributing to a warm and wet climate on adjacent landmasses.

Whereas the edges of subpolar gyres are relatively nutrient rich and thereby sustain marine life, ocean bioproductivity is especially low over the central portions of subtropical gyres, owing to strong thermal stratification. These central gyral regions are ocean deserts.

The warming global atmosphere is shifting extratropical atmospheric circulation toward the poles. Correspondingly, ocean gyres are moving poleward too: ~0.8 kilometers per year. That may seem slight, but the effects are significant.

Coastal waters are getting fewer nutrients, which diminishes sea life.

At their western edge, marine gyres move warmth and moisture from the tropics to higher latitudes, affecting air temperature and rainfall – a shift likely to drive more extreme heatwaves in subtropical lands.

The North Atlantic gyre, called the Atlantic Meridional Overturning Circulation (AMOC), connects the Arctic Ocean with the tropical Atlantic. The AMOC has a net northward heat transport, and so contributes to polar warming, as well as having a moderating effect on Europe’s climate.

The AMOC has undergone exceptional weakening in the last 150 years compared to the previous 1500 years. The circulatory limping is quickly getting worse.

The result has been thermal stagnation. A cold blob has settled in south of Greenland for the past 5 years — a large region bucking the overall global warming trend and instead showing a marked cooling pattern.

Aquatic life populations are being stressed as a result of the AMOC slackening. The water warming off the US seaboard portends stronger hurricanes there. Europe is in store for prolonged seasonal freezes and heat waves.

On the Pacific coast of North America, salmon and other fish are having difficulty adjusting. “The North Pacific is blocked by continents. There is no space for fish to retreat,” observes Chinese oceanographer Hu Yang.

Along the southwestern coast of Africa, the eastern edge of the South Atlantic Gyre is shifting. The Benguela Current has historically driven cold, nutrient-rich water from the depths of the oceans to the surface, nurturing massive blooms of algae and plankton that are critical feeding areas for fish, marine mammals, and birds. That current has become less frequent in its nutritional offerings and less giving when doing so.

In densely populated coastal Asia, the changes are likely to unleash more intense rainstorms, along with making heat waves more frequent and severe in subtropical areas.

Ocean currents also disperse the eggs and larvae of marine organisms over wide areas. The gyral shifts are affecting the distribution of many species.

“As long as global temperature keeps increasing, this movement of currents cannot stop, because the climate is not in equilibrium with CO2 levels,” concludes Hu Yang.