Until the 20th century, the stocks of fish in the vast oceans of the world were thought inexhaustible. There was no attempt to limit catches. All the effort was put into maximizing exploitation.

Overfishing was noticed in certain areas by the turn of the 20th century. Nothing was done about it; quite the contrary.

The decimation of ocean ecosystems has been a government project. After the 2nd World War, the United States used fishing rights and fisheries technology as a geopolitical tool. The US engendered and even subsidized overfishing. Sensing the political struggle, other countries responded in kind.

Despite more species dwindling in numbers, the only effort to stem overfishing has occurred once specific stocks are exhausted. The action taken: temporary moratoriums in a limited region control by a national government. Such measures never result in recovery to what had been before the overfishing started.

China has been a notable aggressive overfisher this century. Having caught all they could near their own coasts, Chinese fishermen went farther offshore and into distant waters.

In the 2010s, China took all that it could out of African waters, including destroying seabeds with bottom trawlers. Bottom trawling is banned, but the Chinese show little regard for legalities, and no concern for sustainability.

Some $35 billion a year is lavished on the fishing industry by governments worldwide. About $22bn helps destroy fish stocks. 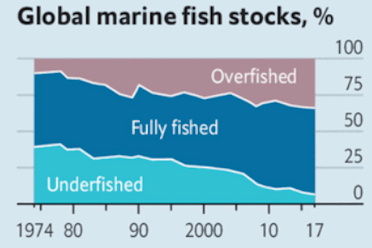 At the current extraction rate, by 2050 the problem of overfishing will resolve by there being nothing left to fish. The oceans will be a global marine desert.

Fishing is typical of the relentless rape of Nature. Deforestation accelerates in those nations which still have extensive forests. Road mileage and the number of vehicles worldwide continue to grow. Greenhouse gas emissions, briefly stalled during the extensive covid “lockdowns,” are now heading back up. Plastic production and its subsequent pollution on land and in the oceans are burgeoning exponentially.

Disingenuous corporate promoters fool rubes with their talk of “clean” energy when no such thing exists. The laughable idea that technology can miraculously cure what technology caused still carries currency by those who bother to ponder the dire trends.

The public at large remains oblivious about self-extinction by the end of century. In response to aware activists, governments make promises of doing something in the future, kicking the can of correction down the road. There is no acknowledgment, and hence no contemplation, of averting the inevitable: the collapse of world civilization by 2070.

“Monsters of the deep: Illicit fishing devastates the seas and abuses crews,” The Economist (22 October 2020).