Covid-19 has become a pandemic. The world economy is getting sick.

(The prediction of the Covid-19 pandemic bringing the world economy to its knees was made here on 26 February. This essay has been updated with confirming developments since (as of 14 March 2020), and a more extensive analysis of forward-looking economic dynamics.)

The global economy is ultimately powered by consumer spending, which directly acts as the wellspring for roughly 2/3rds of economic activity. Consumer spending is possible because consumers have money to spend – which, for the masses, means working a job.

The 1930s Great Depression lasted for nearly a decade because of extensive extended unemployment. At its abysmal depth, only 25-33% of workers were unemployed (estimates varied).

Covid-19 originated in the economically most important country in the world: China. China achieved prosperity by becoming the world’s factory, with an industrious people that spent freely, and a government which engendered economic growth at the grievous expense of environmental degradation.

Even more significant to world trade – beyond consumption and final production – is that China provides many intermediate components/supplies and raw materials upon which the rest of the world depends. China is integrated in the global supply chain. That supply chain was broken when trade with China broke down.

Covid-19 debilitated China in February 2020. Its economy stalled. With its epidemic slowing, the country got back to work in early March, just as pandemic was ramping up elsewhere in the world, most notably Europe and the US.

The death rate of Covid-19 will be ~1%: mostly older people and those with underlying health conditions. But fatalities are not the toll that will prove telling.

Many Western nations have had a senseless, panicked response: instituting extensive quarantines only after their epidemics had blossomed. Italy and Spain belatedly shut down their economies when their outbreaks raged – laming their economies but not stopping the spread. The US, led by an imbecile in a land of panicky people, is traipsing down the same path.

Covid-19 is asymptomatic for a couple of weeks, affording ready transmission. Many have mild symptoms once infected. But at least 1/3rd of those with Covid-19 are going to be bedridden for 2–3 weeks. That’s an awful lot of sick leave for an extended duration.

Since the 2008 recession, with low interest rates, companies found debt to be the least expensive way to finance their operations. Most small and medium-sized companies now carry considerable debt as their modus operandi of doing business. And numerous large companies are in hock as well: reliant upon continuing external financing.

Stock bourses are not just a bellwether for how well the rich are making money from money. Finance is integrated with the markets. As global stock markets tank, banks are going to trim lending. Governments dropping already low interest rates, as the US did as a kneejerk reflex, won’t make any difference to banking prudence. Companies carrying debt will feel the pinch.

Constricted lending, combined with production disruption and a fall in consumer confidence, will cascade into less consumer spending (other than for health care), followed by a parade of bankruptcies, with concomitant job losses. And so on, in a downward spiral.

The pandemic depression is just starting. It’s going to get a lot a worse in the months to come, both economically and politically.

Downstream, the shoddiness of governance worldwide will be exposed. Interestingly, China’s government will come out looking reasonably competent by comparison. So too other Asian governments, notably South Korea and Japan, albeit in distinctive ways.

Rather than block the movement of people or cripple its economy, as China did, South Korea has relied on extensive testing to isolate and care for those infected.

Contrastingly, Japan’s government has struck a pose of nonchalance – doing little except caring for those who fall sick. That stance may be warranted, as the Japanese are an especially hygienic and cautious people, not prone to panic.

For many years now, the Japanese people have been displeased with the conservative party which rules them. But Japan suffers a political torpor because its system is rigged such that reform is stymied. The Japanese have been economically and politically sleepwalking this century – a nondynamic which shows scant indication of changing. The Japanese illustrate that competence is a perspective subject to expectation.

That the world will infect itself with an economic recession over Covid-19 is certain. The great uncertainty is how deep and prolonged the downturn will be.

Western economies will continue their downward spiral for at least the next 2 months (into May), until the pandemic exhausts itself. Meanwhile, Asians will be trying to economically revive without the great Western consumption machine upon which they have greatly relied. The dynamics of world trade will be altered by this pandemic. Asian economies are likely to become more self-reliant.

And then there is how the Western world is going to perk itself back up.

Many governments have indicated that largesse is in store for revival. For example, US President Trump has promised to bail out those industries most affected. This would be a continuance of trickle-down economics that has enriched those not needing help while leaving the workforce diminished and on precarious financial footing.

In the US, every downturn has seen fewer well-paying jobs emerge in the subsequent recovery. So it was after the 2008 recession, when less than half of the jobs that came back paid as well as they had in 2007. This has been a continuing trend. 94% of the 10 million new jobs in the US 2005–2015 were either temporary or contract-based, not the traditional salaried positions with fatter compensation. 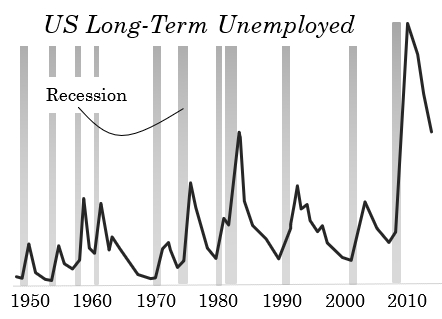 The official US employment figures are rigged to render a rosy picture. Only those regularly registering with the state as looking for a job are counted as unemployed. With at least 100 million Americans living hand-to-mouth in 2019, the government was tooting about how unemployment was at an all-time low and the economy booming – pointing to the vitality of the betting parlor known as the stock market for proof. Other governments play this same game to make themselves look good.

Business picks up when those with money to invest look forward and anticipate better times. Capitalism is a confidence game.

That confidence ultimately comes from consumers. In this instance, consumers shocked by sickness and the losses of loved ones, in societies where governments have been shown to be inept in handling a public health crisis – not a performance which inspires confidence.

As with the recovery after 2008, the musical chairs of financial trading enriching the rich will start playing again. In this instance, beginning with a slow waltz of preferring phoenix industries arising from the ashes of the pandemic, such as the travel business, which will have been decimated.

Anticipating drooping demand, oil and other commodity prices dropped considerably in February and March 2020. The result will be lower consumer prices for gasoline.

Overall, prices for many goods will rise in the months to come, as stocks dwindle but manufacturers are reluctant to restart production full tilt owing to uncertainty. The result is likely to be an overall modest rise in prices, with certain goods becoming surprisingly expensive from where they were before the pandemic hit.

Rising prices may spur governments to nudge interest rates up – a signal that will heighten uncertainty in the private sector, and so retard revival.

As with the aftermath of the 2008 recession, businesses will be inclined to hire temporary and contract workers rather than take on fulltime employees. Automation will accelerate. The labor force loses.

Now stir in that the self-extinction event continues apace. While the media and environmentalists will cheer lower greenhouse gas emissions this year, these figures mean nothing. Global warming will continue to pick up pace, with extreme weather events more frequent and intense – not a formula to inspire consumer confidence.

The likelihood is that the world economy will dither in doldrum for some time, with a recovery that leaves most workers in the industrialized world worse off than they were – a wretched reprise of the last global recession.

Thanks to Covid-19, 2021 will dawn on a different economic world than that which ushered in 2020. Sanguineness will have sorely sagged, with humanity feeling spent, and the world economy reflecting that sentiment.