Though known since ancient times, petroleum came into prominence as a fuel in the last half of the 19th century. Asphalt was used in constructing the walls and towers of Babylon in the 18th century BCE. By 347 there were bamboo-drilled oil wells in China.

Scottish chemist James Young distilled kerosene from petroleum in 1847. Kerosene was to prove a cheaper alternative to whale oil, to cetacean relief.

One of the first engine-drilled oil wells belong to American oil driller Edwin Drake, who sank a gusher in 1859 near Titusville, Pennsylvania.

Like electricity, the first employment of petroleum distillates was for illuminants. While the lighter fractions first went to lighting, thicker fractions served as machine lubricants, while the heavy, residual fractions, once waste, became heating oils. The lightest, most volatile fractions – naphtha and gasoline – were regarded for decades as dangerous nuisances.

Fossil fuels went everywhere pipelines, planes, ships, trains, trucks, and automobiles would take them, and from everywhere they were exploited, with little regard to the continuing viability of the environment to support life.

Everywhere that oil is extracted, transported, or processed, it spills. Everywhere.

The recently built (2010-2016) Keystone pipeline that runs between Hardisty (in Alberta Canada) and American terminals in Patoka Illinois and Houston Texas has leaked numerous times, including 2 huge spills. “2 cracks on a fair­ly new pipe­line – geez, what’s going on?,” wondered American pipeline safety consultant  Rich­ard Kuprewicz. “With each of these major spills that happens on the Keystone pipeline system, it becomes clearer and clearer that this is not safe,” observed American environmentalist Doug Hayes.

Sooner or later, there are significant spills at every major find where oil is extracted. The economics of oil is the practice of accident.

Affected ecosystems do not fully recover for centuries. Water polluted by petroleum simply cannot be made potable for any plant or animal life.

“There are no fish in the lakes,” lamented Peruvian Galo Vásquez after an oil spill in the remote Amazon.

Ships carrying petroleum regularly have spills, most of which are ignored. Only those where the vessel does not get away are polluters even identified.

Most major offshore oil spills involve tankers being hit or running aground. Time and again, carelessness is the cause.

Exploding oil rigs are more spectacular but less frequent. America has had such 2 historic events, though there have been hundreds of others.

On 28 January 1969, an oil rig exploded off the coast of Santa Barbara, California, spilling ~14,000 tonnes of oil into the channel and onto the beaches. The marine and coastal ecosystems were devastated.

On 20 April 2010, an oil rig in the Gulf of Mexico – the Deepwater Horizon – exploded and then sank. The rig was 66 km off the coast of Louisiana. The massive leak, the largest in history, was never stopped and continues as you read this. 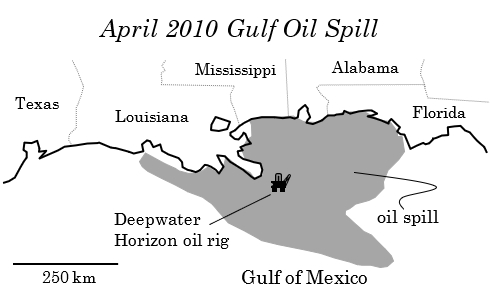 The oil leak was 30% larger than estimated in the aftermath of the blowout. Considerable oil slipped past detection efforts, including satellite imagery and local monitoring. Much of the undetected oil swept through the Gulf and out into the Atlantic Ocean.

This invisible oil concentrated below the water’s surface killed 50% of the marine life it encountered. “Basically, when you have oil combined with ultraviolent sunlight it becomes 2 times more toxic than oil alone. Oil becomes toxic at very low concentrations,” noted oceanographer Igal Berenshtein.

The environmental destruction from the spill was estimated in 2010 to be over $17 billion. This ridiculous price tag – based on projected loss of revenues from other exploitation of Nature no longer possible – does not account for ongoing damage nor that ecosystems will never recover.

British Petroleum, owner of the rig, paid a tax-deductible fine equivalent to ~10% of its annual revenues, and helped with the cleanup. No effective regulations were put into place to prevent a recurrence.

Another long-standing leak of gross proportion in the Gulf of Mexico is from an oil-production platform 19 km off the coast of Louisiana that sank during Hurricane Ivan in 2004. Nothing has been done to cap the many leaking wells which spew 300–700 barrels of oil per day into Gulf waters.

Almost all oil pipelines leak at some time. Even pipelines that do not visibly leak exude toxins which kills fish and other aquatic creatures. Universally and unequivocally, petroleum is a death sentence for life.

In early 2020, the administration of President Donald Trump approved eliminating curbs which limited drilling in American waters, along with rolling back safety regulations meant to protect workers on rigs. US environmental protection laws are spotty, allowing presidential administrations to enforce or ignore preserving Nature as they see fit. Trump has aggressively gutted all regulations against the rape of Nature or that benefit the well-being of average Americans to allow maximal capitalist predation.

Darryl Fears, “The toxic reach of Deepwater Horizon’s oil spill was much larger — and deadlier – than previous estimates, a new study says,” The Washington Post (12 February 2020).