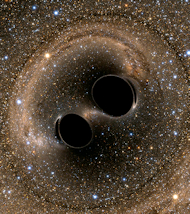 Light and gravity may seem to have nothing in common. But, inspired by the singularity of a black hole, the quanta by which they manifest may transmigrate.

The exhibition of existence appears through quantization of energy constructs. Photons light the show we call Nature. Gravitons provide the ballast. Both are bosons creating force fields. Otherwise, the two couldn’t be more disparate in their effects.

Photons affect the immediate area and manage electromagnetism, the force by which existence is powered. Contrastingly, gravitons exercise a sway of entropy over a long distance – an energetic fatiguing rather than photonic energizing.

The exhibition of existence is interrupted by singularities of nonexistence which define the architecture of the universe: black holes. Massive black holes provide the axis around which galaxies coalesce and rotate.

Black holes can be visibly inferred by quasars, which are interstellar light shows produced by matter hurtling around black holes, throwing off detectable energy from their frenzy. But black holes themselves may at times light themselves, as gravitons spontaneously turn into photons. “There exists a self-acting mechanism that can transform coherent classical clouds of gravitons into a similar construct of photons,” theorizes American physicist Raymond Sawyer. This conversion process is a crescendo outburst when a gravitational wave breaks: “an extended gestation followed by a very sudden transformation,” adds Sawyer. Photons may also transform themselves into gravitons.

That bosons which impose antithetical behaviors may transmute into one another is one of many telltales that there is a unicity underlying the vast diversity, with a coherent force behind Nature’s display which enforces the algorithmic “laws” through which the cosmos is fabricated. For, if moments of chaotic transformation may occur only at an extremity of events, a process of guidance must be in play.