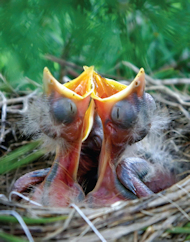 One of the miracles of life is the symphony of coherence during the development of complex organisms. Biologists misapprehend this miracle because they embrace the wrong paradigm of reality. The idea of “physical forces” is a conflation of impetus and artifact.

American morphogenesist Karl Palmquist and his colleagues studied avian development. “Combining theory with experiment,” they state: “During embryogenesis, cell collectives engage in coordinated behavior to form tissue structures of increasing complexity.” They go on to say that there is “a role for mesenchymal [connective tissue] dynamics in generating cell-level ordering and tissue-level patterning through a fluid instability.”

Such statements by biologists, about physical forces, are common. The core assumption behind conventional developmental biology is that physicality magically transmutes into progressive forms – that matter somehow makes itself move and mutate into different forms with distinct functions.

This paradigm of “matter mojo” is matterism. Assuming matterism makes a mockery of science by its abject neglect of philosophy. Matterism turns what should be science into science-fiction.

The distinction between science and its fictional antithesis boils down to a single premise. That premise is the answer to what philosophers call the mind-body problem.

The mind-body problem is figuring out how to answer the question: what is the interface between the mind and the body?

Does matter make the mind (matterism)? Or does the mind make matter (energyism)? Or are things as they appear: the mind perceives a physical world (dualism)?

The mind-body problem arose under the naïve paradigm of dualism, which is what we all experience. In all of history, no one has ever come up with a decent explanation of how an immaterial mind can coexist in a material (physical) world. From that failure, philosophers diverged into 2 diametric schools of thought: matterism versus energyism.

In arguing that reality is from a single source, both theories are monisms. That is their only point of agreement.

In every other aspect, matterism and energyism are black and white. Dualism was the gray that got washed away.

Either matterism or energyism is correct. How to decide? 18th-century English philosopher Adam Smith rightly answered: “The theory that can absorb the greatest number of facts is the one that must rule all observation.”

If matterism cannot explain everything that we know happens, it cannot possibly be true.

According to matterism, the brain creates the mind. Matterism cannot explain how life forms without brains can respond to the environment.

How can, during embryonic development, “cell collectives engage in coordinated behavior to form tissue structures of increasing complexity,” as Karl Palmquist and company observe? Matterism cannot say how cells can act intelligently.

Plants don’t have brains. How can plants grow up, or aim their leaves toward sunlight, or search for resources in the soil with their roots? Matterism cannot say.

A virus is just a meager collection of molecules. How can a virus infect a body, evade an immune system, travel to specific places within the host body that it wants to go? In other words, how can a virus act like it knows what it is doing? Matterism cannot say.

When it comes to biology, matterism cannot explain anything. There are no “physical forces.”

All that we ever perceive are artifacts: material objects. It is a foolish assumption that these artifacts create themselves. Yet that is precisely what matterists do. There is no science in the theory of matterism.

You can’t talk about matter doing anything without invoking the concept of energy. Matter can only move because it has energy. On that even matterists agree. Therein lies the definitive proof that matterism is a lie.

The key principle of modern physics is the nature of energy. Modern physicists have proven – beyond all doubt – that matter is made of energy. That statement alone disproves matterism once you look at what energy is.

The idea of energy is just that: an idea. 21st-century American physicist Carlos Calle explains: “Energy is an abstract concept introduced by physicists to better understand how Nature operates. Since it is an abstract idea, we cannot form a concrete picture of it in our minds. We find it very difficult to define energy in simple terms.”

So you see. Matterism cannot possibly be. Matter is a myth of the mind.

Now you know. All that so-called science you’ve been reading is silly science-fiction.

In insisting that there is a physical world “out there,” the mind deceives. Recognizing this reveals the rabbit hole that leads to reality: energyism. As Sherlock Holmes stated, “When you have eliminated the impossible, whatever remains, however improbable, must be the truth.”

Do you really want to know how it all works? Read The Red Pill: Mastering The Matrix.