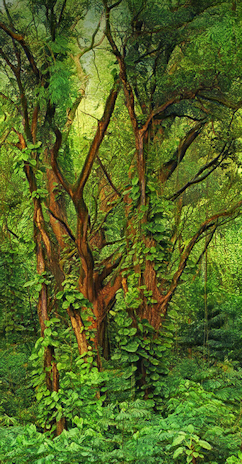 No serious student of botanical life doubts that plants are aware of and responsive to their environment. By definition, awareness requires consciousness, as consciousness is the ability to be aware. Yet religious fanatics claim that plants lack consciousness.

Lincoln Taiz, who claims to be a botanist: “There is no evidence that plants require, and thus have evolved, energy-expensive mental faculties, such as consciousness, feelings, and intentionality, to survive or to reproduce.” The mental problem with Taiz, like all matterists, comes from axiomatic faith that physicality is the be-all and end-all of existence – a very unscientific supposition.

Recognition is a feat of awareness. Deciding is a mental act which requires consciousness.

“Plants plastically respond to light competition in 3 well-documented strategies, including ‘confrontational’ vertical growth, shade tolerance or lateral avoidance,” noted German botanist Michal Gruntman. “Plants choose between these plastic responses according to the relative stature and densities of their opponents.”

For multicellular organisms, choices begin at the cellular level, after comprehending a situation.

ATP is the universal metabolic energy molecule. “ATP is only outside a cell when something is damaged, so it’s a perfect trigger for immune responses,” said American plant pathologist Jeremy Jewell. Both animal and plant cells recognize when ATP is “out there” rather than “in here.” “Extra-cellular ATP is a damage signal to the surrounding cells.” Recognizing external ATP as a crisis situation, a cell invokes an immune system response. “Extra-cellular ATP turns on defense responses.”

All evidence indicates that Nature is an exhibition generated coherently and energetically. Refusal to acknowledge the obvious is not science but religion.

Only fools don’t bother to ponder the definitions of words they use. Consider energy. Energy is only the idea of matter in motion. All we think we know is entirely within the mind, of concepts which we mistake for physical reality.

If you want to know how phenomena are fabricated, Unraveling Reality: Behind the Veil of Existence is an entertaining start. If plant intelligence is of especial interest, you’ll enjoy Spokes 2: The Web of Life. Both books are available online from this web site, as well as in printed and Kindle versions.

If you are inclined to philosophize, dive into the deep end with the essay The Mechanics of Existence.

Ian Sample, “Group of biologists tries to bury the idea that plants are conscious,” The Guardian (3 July 2019).

David Nield, “Plants are better at complex decision-making than we ever realized,” Science Alert (28 December 2017).

Jeremy B. Jewell et al, ‘Extracellular ATP shapes a defense-related transcriptome both independently and along with other defense signaling pathways,” Plant Physiology (March 2019).