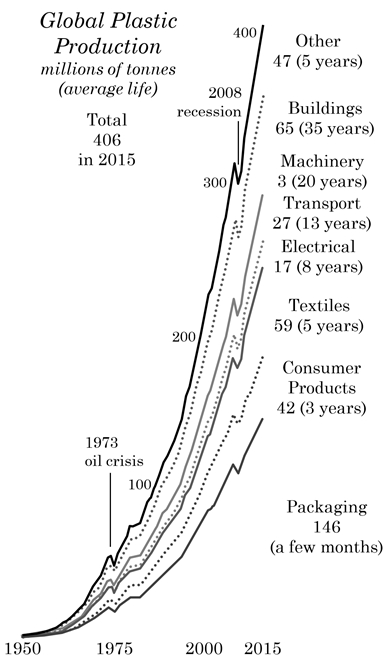 Plastic is indispensable for many applications, including surgical gloves and condoms, and in packaging foods to keep them fresh longer, thereby reducing food waste. Plastic is also eminently disposable. 36% of the plastic produced was used once or twice and then thrown away.

13 million tonnes of plastic refuse went into the world’s oceans in 2015. At that disposal rate, marine plastic will outweigh fish by 2050. But this projection is a gross understatement. Plastic production is expected to double between 2015 and 2035.

60% of the plastic produced is less dense than seawater. Wind-driven upper ocean currents act as gyres to distribute and concentrate buoyant seaborne plastic. There are 5 major ocean gyres on Earth at the present time.

Several huge plastic garbage deposits have formed throughout the world’s oceans, where plastic permeates the entire ocean depth in considerable concentration. The Great Pacific garbage patch in the northern Pacific Ocean is exemplary. This plasticized vortex is mostly comprised, volume-wise, of small bits (microplastics). By weight, nearly half of the plastic comes from discarded fishing nets, which readily snag sea life.

Marine plastic is consumed by oceanic life, and by those who eat seafood. At least 2/3rds of the seafood eaten has plastic in it.

Many toothpastes, personal cleansing and cosmetic products now include tiny, wrongly-presumed-harmless plastic microbeads intended to help keep skin, scalp, and pearly whites clean. A single application of a product with microplastics can release 100,000 of these miniscule beads. Harmless they are not.

“Polyethylene, which is the most produced and discarded synthetic polymer globally, is the most prolific emitter of greenhouse gases,” noted Canadian biological oceanographer Sarah-Jeanne Royer.

Plastic pollution has permeated the planet, from the poles to the deepest ocean crevices. Scientists have been stunned to discover plastics in the most remote locations. “Microplastics can reach and affect remote, sparsely inhabited areas through atmospheric transport,” reported French ecologist Deonie Allen.

Microplastic rains down from the sky and is increasingly filling the air. Urban dwellers around the world are breathing in disgusting doses of micron-sized plastics. “London air has a high abundance of microplastics,” said English ecologist Stephanie Wright.

Surprisingly little is known about the toxicity of plastic ingestion. There is no question that the world is currently choking on plastic pollution, and that the infestation is worsening.

For a fuller brief on plastics, read The Fruits of Civilization.

Damian Carrington, “Alarm as study shows how microplastics are blown across the world,” The Guardian (15 April 2019).

Roland Geyer et al, “Production, use, and fate of all plastics ever made,” Science Advances (19 July 2017).