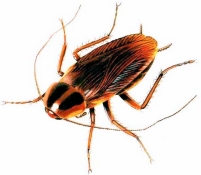 Organisms of all kinds rapidly adapt. The more primitive, the more quickly evolution creates a solution.

Human pests are exemplary. In response to assault of toxic baits by humans, who consider their home not a proper home for roaches, German cockroaches rapidly adapted. The sugar glucose, put in baits to attract, instead took on a bitter taste, which the roaches avoided.

Instead of taste buds, cockroaches have taste hairs on many parts of their body. But the taste mechanism is much the same. A sensed molecule triggers a signal to the brain, which deciphers substance quality and decides a response.

Glucose is a come-hither sweet to countless life forms, and a ubiquitous biological fuel. But roaches at the genetic level adaptively “learned” that glucose out of context to a natural sugar is a trap.

This adaptation took less than a decade from the time glucose baits were introduced. The evolutionary mechanism at the cellular and genetic levels remains a mystery.

Mosquitoes are another highly unpopular pest. They quickly evolved not to linger on walls that have been treated with insecticide. Instead, untreated ceilings are preferred.