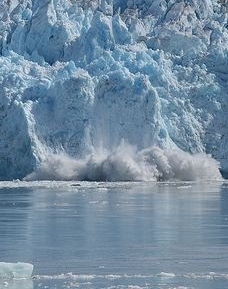 Every survey of global warming brings an alarming appreciation of accelerating rate. The poles are particularly punked. Ice sheets are in serious retreat. This affects the weather far and wide.

Arctic ice melt is a self-reinforcing dynamic. Ocean water is darker than sea ice, and so absorbs more solar radiation. This accelerates ice melt, particularly during the summer.

The ice melt effect extends into excess heat release, especially during the autumn, decreasing the temperature and atmospheric pressure gradients between the Arctic and middle latitudes. This weakens the winds of the polar vortex and jet stream.

The subpolar gyre is the counterclockwise circulation of water south of Greenland and Iceland. Warming water in the tropics is working its way into the Arctic via the subpolar gyre, which is strengthening. A similar gyre is affecting the Southern Ocean off Antarctica.

Massive blooms of phytoplankton are appearing under ice-covered Arctic waters. This owes to the thinning ice and lack of snow, as well as change in ocean currents. In contrast, phytoplankton concentrations in lower latitude ocean waters have dropped 40% since 1950, owing to ocean warming.

The Arctic warehouses large reservoirs of methane, a potent greenhouse gas: over 80 times as powerful as rising carbon dioxide levels. The methane has been locked away in tundra soils and marine sediments. As the Arctic sea ice cracks, the methane below is released.