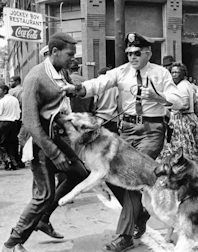 Dogs serve as an adjunct to policing, their employment reflecting the morals of their masters.

Dogs have been employed by men to help them keep order since medieval times. A parish constable used bloodhounds to hunt down outlaws; the dogs upkeep paid for by tithes by those of means in the village.

Bloodhounds in Scotland were called “slough dogs.” The word sleuth derived from this.

Industrialization turned London into a seething cesspit in the mid-19th century. Night watchmen were given guns and dogs to deter robberies.

In 1888 the police in London were publicly humiliated for failing to apprehend Jack the Ripper, scandalous serial killer of women prostitutes in the Whitechapel district. The chastened commissioner, Charles Warren, got 2 bloodhounds, and tested them with an attempted track from the site of one of Jack’s killing. One of the dogs bit Warren and the two of them later ran off, necessitating a police search for the errant dogs.

From the mid-1890s dogs were used in Paris against roaming gangs at night, and for crowd control and against gangs in the German empire. The Germans choose the Alsatian (German shepherd) as the breed of choice. The Doberman pinscher ran a close second.

The first police dog training academy was founded in Ghent Belgium in 1899. The Belgians favored their sheepdogs and wolfhounds. Dogs were trained for obedience to their masters, tracking, and attacking upon command.

The crime waves that wracked much of Europe after the 2nd World War were partly addressed with dogs.

In the US, police dogs were sporadically used between the world wars, but it was only after their successful use in post-war Britain that American police again tried dogs. Private security forces in the US had better luck with dogs than inept police. It was only from the 1970s that dogs became common in American police departments.

So-called law enforcement reflects the morality of the society in which officers operate. American police are notorious for their brutality. So too their use of dogs, which are sicked on suspects already apprehended, as a means of cruelly maiming them. American police, backed by courts, operate with impunity.