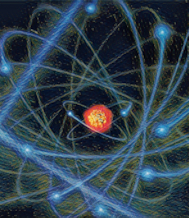 Certain localized energy fields quantize into the phenomenal form called “matter,” which is Nature’s sublime deception. As Nature is flagrant display of diversity, among the zoo of quanta are particles whose seeming existence is merely mathematical, but with behavior that has material effect. These are quasiparticles.

The stuff of stars is plasmic. Plasma is the most abundant form of matter. The vibrancy of plasma comes from their ionization. Plasma is a stew of atoms missing electrons in an atmospheric swill of free electrons.

A photon is an optical oscillation which produces light. A plasmon is a quasiparticulate plasma oscillation.

By stimulating electron interactions, plasmons play a role in the uncertainty matrix of quantum emergence. Plasmons contribute to the optical properties of metals and semiconductors. The shimmering colors of copper and gold owe to the play of plasmons.

A phonon is a collective excitation that shuttles heat around solids, and herds electrons into the coherence that affords superconductivity. Phonons transfer heat through quantum fluctuations.

A magnon is a collective excitation that quantizes the spin wave which characterizes the spin property of all quanta. Magnons lurk about crystal lattices, influencing the temperature at which materials may adopt superconductivity.

Electrical conductivity is more than merely the flow of negatively charged electrons. Positively charged atomic protons play a critical part in cooperating with or countering electrons on their merry way.

Atoms are more than the gatekeepers of electricity. The relation between electrons and nucleons is entangled. The movement of electrons has a direct effect on atomic arrangements.

Water conducts electricity. In doing so, flowing electrons tug on water molecules’ hydrogen atoms, moving protons. This process, known as the Grotthuss mechanism, occurs when light hits the eye’s retina. Proton jumping is an essential aspect of turning light into an atomic signal that can be biologically transferred, thereby enabling the physiology of sight at the atomic level.

A polaron is a quasiparticle that characterizes electron mobility. A polaron appears as an electron cloud. “Polaron transport, in which electron motion is strongly coupled to the underlying lattice deformation or phonons, is crucial for understanding electrical and optical conductivities in many solids.” ~ Chinese physicist Junjie Li et al

Quasiparticles exist even when nothing is there. The holes left behind in semiconductors after electrons move on are as significant to the electromagnetic properties of materials as the space between notes are in music.

An exciton is a characterization of the relationship between an electron and its hole. Excitons are found in semiconductors, insulators, and some liquids. Excitons can transport energy without affecting net electric charge.

Plants reply upon excitons to turn sunlight into usable energy. The light-harvesting proteins responsible for photosynthesis employ electrons to absorb photons of sunlight. The resultant energy kick knocks an electron out of position, creating a hole.

The electron and hole link up to form an exciton, which is shuttled about the photosynthetic machinery. When the exciton gets to where it’s needed to do its bit, the electron and hole recombine, releasing energy employed to split water into constituent hydrogen and oxygen; a key step in making sugar from sunlight, air, and water.

For more on quasiparticles, read The Science of Existence.