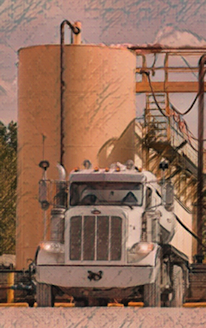 Oil and gas extraction brings to the surface radioactive brine known as formation water. The water is separated from the fossil fuel and put into tanks or pits, becoming produced water.

As oil and gas is removed from a deposit, more of the extraction is formation water. Declining oil and gas fields generate produced water.

While uranium and thorium are not water soluble, their radioactive decay products, such as radium, may dissolve in brine. Radioactive material may remain in solution or settle out to form sludges that accumulate in tanks and pits, or form mineral scales inside pipes and drilling equipment.

The concentration of radioactivity in produced water varies considerably, depending upon the concentration and type of radionuclide in the formation water and the oil/gas production process used. The last published US federal government survey was in 2000, when the produced water by the petroleum industry was estimated at 260,000 metric tonnes, equivalent to 18 billion barrels of radioactive waste. The US Environmental Protection Agency (EPA) noted that: “The radioactivity levels in produced waters from unconventional drilling [such as fracking] can be significant and the volumes are large. Produced waters contain levels of radium and its decay products that are concentrated.”

US oil & gas production leap in the 1st decade of the 21st century with the widespread introduction of fracking, resulting in a concomitant jump in produced water and radioactive debris – dirt and rock – called drill cuttings.

“If I had a beaker of produced water on my desk and accidentally dropped it on the floor, they would shut the place down,” says microbiologist and radioactivity expert Yuri Gorby. “And if I dumped it down the sink, I could go to jail.” “Essentially what you are doing is taking an underground radioactive reservoir and bringing it to the surface where it can interact with people and the environment,” says nuclear-forensics scientist Marco Kaltofen. “Us bringing this stuff to the surface is like letting out the devil,” says British radiation biologist Ian Fairlie. “It is just madness.”

This madness goes unregulated. “The Nuclear Regulatory Commission (NRC) does not have statutory authority to regulate naturally occurring radioactive material,” says NRC spokesman David McIntyre. “There is no one federal agency that specifically regulates the radioactivity brought to the surface by oil-and-gas development,” reports the EPA.

In 1980 the petroleum industry received an exemption from the EPA that waste generated at oil and gas wells was not a hazardous waste. Despite finding copious toxins in produced water, the EPA confirmed the exemption in 1988, claiming that the “potential risks to human health and the environment were small.”

The alternative would have been to shut the American petroleum industry down. “If you close the loophole, you would put the industry out of business,” concludes public interest group researcher Liz Moran.

Produced water is dumped onto soils and into waterways, and sprayed on highways. “The high radioactivity in the soil at some of these sites will stay forever,” says geochemist Avner Vengosh.

The level of uptake by agricultural crops grown in contaminated soil is unknown because it has not been studied. “Not much research has been done on this,” notes environmental engineer Bill Burgos.

The new buzzword in the oil-and-gas industry is “beneficial use”: transforming produced water waste into commercial products, like pool salts and home de-icers. Radioactive brine is sold as a liquid de-icer for use on home patios, sidewalks, and driveway, with the label “safe for environment & pets,” when it is anything but. “Every time you put this solution onto your front steps you are basically causing a small radioactive spill,” exclaims Vengosh.

Workers around produced water waste has suffered high rates of lesions, cancer, and other maladies. “Almost everywhere we test we find contamination,” says environmental ecologist Paul Templet. The industry has “known about the problem for 110 years, but they haven’t done anything about it,” Templet remarks.