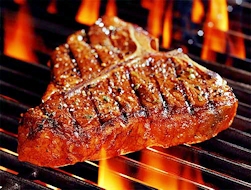 It has long been known that eating red meat engenders cardiovascular disease. The tasty fat marbled in the meat has long been pointed to as the villain, as has cholesterol. That turns out be a subplot in the story, though consuming animal fat is unhealthy, and the wrong kind of cholesterol does damage. Instead, carnitine is the culprit.

Carnitine gets metabolized by the intestinal microbes that perform most of human digestion. These bacteria burp a byproduct that turns into TMAO – trimethylamine N-oxide – in the liver.

Vegans (vegetarians who don’t consume animal products) don’t have this problem. Their TMAO levels are much lower. Even if they swallow pills with carnitine or have a steak (solely in the interest of research), their microbiota are healthier, and so produce little to no TMAO.

The new theory is that TMAO enables cholesterol to wedge in artery walls, as well as preventing the body from properly regulating blood cholesterol level.

Stanley L. Hazen, a researcher on the study that discovered the role of TMAO, was shocked at the findings. “We did not expect to see such a dramatic difference.” He says, “I am not a vegan. I like a good steak.” Now he’s less sure that any steak is good. Hazen has cut way back on his consumption of red meat.