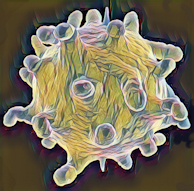 The human respiratory tract hosts a diverse community of cocirculating viruses: some of which benignly reside, whereas others aim at acute infections. Interactions between these viruses alter the risk of sickness.

Infecting a cell is a skill. Viruses of the same strain cooperate to be more successful pathogens. Conversely, viruses in different families may compete for the opportunity to inflict illness.

During flu season, influenza viruses sometimes team up with pneumonia bacteria to attack the lungs. Along with the immune system, commensal viruses and bacteria which reside in the respiratory tract do their best to repel the onslaught.

Influenza viruses do not get on well with cold viruses. If attacked by both simultaneously, a potential host has a better chance of not getting too sick from either, as the two pathogens may weaken each other enough for defenses to eliminate the threat. If sick with the flu, the odds of catching a cold are lowered.