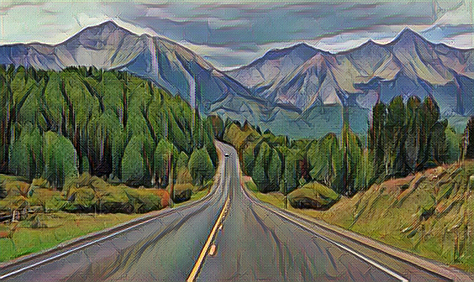 The modern lifestyle is defined by freedom of movement via motor vehicle transport. The cultural and societal impacts of autos have been incalculable. The health costs have been enormous. The environmental destruction has been horrendous.

In industrialized countries, at least 80% of all trips not made on foot are by powered vehicles. For the mass majority with the economic means to own a car, journeys on foot can be measured in meters, not miles.

There were over 1.2 billion vehicles on the world’s roads in 2015. It is a burgeoning parade of motorized metal and plastic, rolling on endless ribbons of asphalt and concrete; an armada that will top 2 billion by 2035.

20% of US territory is directly affected by public roads. 70% of these roads are rural, which are nothing more than an environmentally destructive extravagance.

The picture is similar across much of the world. There are over 64 million kilometers of roads worldwide.

Vehicular transport employs 5% of workers globally; but the economic importance of transport is dwarfed by its environmental impact. Every vehicle is an ecological assault. The mining of resources, industrial production, means and infrastructure by which vehicles move, and the inevitable disposal of all the materials involved come at immense environmental cost.

Roads in remote areas are the catalyst for deforestation and polluting otherwise healthy ecosystems.

“The fragmentation of habitats caused by highway development is often severe. Transportation routes are “disturbance corridors” that disrupt the natural, more homogeneous landscape. In forested environments, these disturbances can cause (1) dramatic physical disruption to the continuous vegetative community; (2) disruption to the structure and function of habitat; and (3) impacts to resident wildlife, which must negotiate, tolerate, and cope with the habitat barriers. In addition, disturbance corridors created by forest fragmentation alter the natural mix of habitats and species by providing conditions suitable for early successional plants and animals. They replace forest trees with grasses and shrubs, eliminating nesting habitat for forest-interior species. While they provide dispersal routes for certain small mammals, they present barriers to many species.” ~ American ecologist Mark Southerland

Motor vehicles degrade the environment on every front: in the air, fresh water, and on the seas (fuel extraction and transport), noise, soil quality, biodiversity, and the taking of land on a massive scale.

“Roads and railways fragment ecosystems, a key element of habitat destruction and a principal cause of loss of biodiversity, and runoff from them carries pollutants. The land area ecologically impacted by roads may be tens to hundreds of meters wider than the area physically disturbed.” ~ Roger Hooke & José Martín-Duque

The motorized transport sector is a source of 30% or more of global greenhouse gas emissions (GHGs). Vehicular mobility is the single greatest contributor to GHGs in the US, accounting for 47% of the net increase in emissions there since 1990.

Though the aforementioned are quite enough, nearly 90% of the environmental impact of vehicles is due to their fuel consumption and emissions. Unlike industrial factories on the outskirts, tailpipes are at street level, pumping noxious fumes where people are trying to breathe clean air.

The health costs of vehicular emissions are stunning: estimated to be over $500 billion annually in the US alone (2018 $). “The production, distribution and combustion of gasoline and diesel produces hundreds of compounds – many of which are transformed into yet other compounds by atmospheric chemistry revolving solar radiation, water vapor, and pollutants from other processes. Most of these pollutants are harmful.” ~ American environmental scientists Donald McCubbin & Mark Delucchi

Road salt illustrates the ongoing externality of roads. At least 18 million tonnes of salt is poured on American roads annually to ward off slippery ice. (Governments do not regulate, or even track, the use of road salt.) The inevitable runoff has sorely salted nearly half of the freshwater lakes in the US. “You can’t filter out these salts.” ~ American biochemist Sujay Kaushal

~1.25 million people are killed each year in traffic worldwide. 75% are men. 50 million are injured.

Motor vehicles are the leading cause of accidental death, and the #1 killer of young adults. Nearly half of all traffic deaths are of someone not in a car: pedestrians and unfortunates on 2-wheeled vehicles.

Low-income countries have the highest death toll. Africa sports the most dangerous roads: 2.5 times as deadly as European thoroughfares.