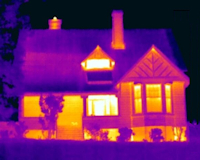 US households emit 20% of that nation’s greenhouse gas exhaust. If considered a country, American residences would be the world’s 6th most significant polluter. The wealthy do more than their share.

“Wealthier Americans have per capita footprints ~25% higher than those of lower-income residents, primarily due to larger homes. In especially affluent suburbs, these emissions can be 15 times higher than nearby neighborhoods,” reports American environmentalist Benjamin Goldstein.

Climate drives energy consumption intensity, which is highest in the cold northern states. The most energy used by a home comes from the need for space heating & cooling, with emissions correlating to the fuel used to do so. Homes in the western US have the lowest level of emissions for their size; those in the central states the highest. On average, the older the building, the higher thermal energy demand, mostly because of lower efficiency.

Greenhouse gas intensity of residential structures depends on the fuel used to power heating and cooling. Places which extensively use carbon-intensive heating fuels, such as Maine, where ~2/3 of households burn fuel oil for heating, are high emitters. An important but less significant factor is the fuel source for electrical energy, with coal, oil, and natural gas power plants leading in emission intensity.

The wealthy, with their spacious living, heat and cool more square feet. Poorer homes may be less efficient in energy consumption but are much smaller.

“Low-carbon homes do not necessarily make for low-carbon communities,” notes Goldstein. Suburbanization and lack of public transport have meant that vehicle emissions may overwhelm the exhaust footprint of living in a smaller house.

From a policy standpoint, the US has been unperturbed about global warming this century. Nothing has been done to lessen net pollution – to the contrary. During the rule of president Trump, the US has abandoned the very pretense of concern. All the words of warning by Americans rightly worried have so far amounted to nothing more than hot air.