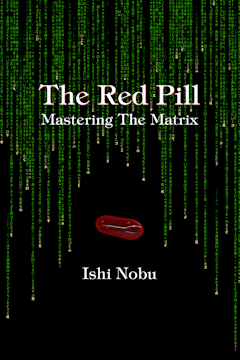 The Red Pill: Mastering the Matrix answers the central questions about the nature of existence and the purpose of life. This timeless wisdom, proven by science, is summarized in an easy-to-read style, using the movie The Matrix as a parable.

Living well is a skill. The Red Pill hands you the key to master The Matrix and attain mental health: a level of consciousness beyond your mind’s deceits, beyond the reach of those pitiable souls in the Collective who believe The Matrix is real. Read online, download pdf, buy on Amazon.

Excerpts from The Red Pill:

“The world has been pulled over your eyes to blind you from the truth.” ~ Morpheus, in the movie The Matrix

In the 1999 movie The Matrix, Thomas Anderson lives a double life. By day he is a corporate computer programmer. At night he goes by the hacker name Neo.

Neo has the nagging sense that something is fundamentally wrong with the world. Neo is intrigued by repeated online mentions of “The Matrix”. He wonders what The Matrix is. He thinks a man named Morpheus may know.

Neo meets Morpheus, who tells Neo that he has the answer to the unease which Neo feels. But first, Morpheus wants Neo’s commitment to the truth. For Morpheus knows that the truth is hard to take.

Morpheus asks Neo to choose. Take a blue pill and remain blind to the truth. Or take a red pill and find out “how deep the rabbit-hole goes.”

Neo hesitantly takes the red pill. Morpheus reveals to Neo that “you are a slave. Like everyone else, you were born into bondage. Into a prison that you cannot taste or see or touch. A prison for your mind.” In the movie, The Matrix is the prison. A computer simulation that keeps those who believe in it trapped in ignorance. Living a lie.

In reality, actuality is The Matrix. A prison you can taste and see and touch. A prison by your mind.

Dualism is how the world appears. Your mind tells you an ongoing story about living in a physical world, with emotional consequences. As most people gullibly believe what their mind tells them, dualism has long reigned.

What is inside the mind is a realm of insubstantial symbols. This is a stark contrast to the body and the tangible world. The immaterial mind and physicality are distinct domains that cannot be reconciled.

If dualism is doomed, the answer must be a monism. Under a monism, existence emanates from a single source. Either the mind is made by matter (matterism) or matter is made by the mind (energyism).

Under matterism, physicality is reality. There is nothing beyond bits of matter.

Ultimately, matterism is magic. It is a fantasy to imagine that consciousness oozes out of molecules. Or that thoughts emanate from electrical or chemical signals. Or that the creativity and order found in Nature, including evolution, owes to random arrangements of molecules. The irony of science, which embraces matterism, is that it disproves matterism on every front.

Under energyism, matter is a mirage of the mind. There is a hidden reality behind the appearance of actuality.

Under energyism, your mind is playing a horrible joke on you. At your expense. A most elaborate deception. Why?

An eternity of nothingness would be an endless realm of boredom. Why not put on a show? Some entertainment to while away the eons. Whence Nature, the exhibition of existence.

Your mind is your tool for experiencing the world. Your instrument of living. Playing your instrument well requires self-discipline.

Letting your instrument play you is lazy mindedness. Lack of self-control. Such is the life of iğnorance in which the Collective partake – and suffer for.

Mastering The Matrix is mastering your mind. Tuning your inner instrument to its highest utility.

Mastery over your mind is not teaching it new tricks. It is instead stopping your mind from its old tricks.