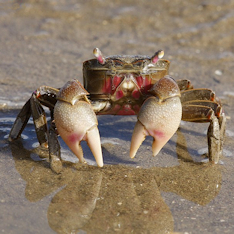 Crabs are an eminently successful group of thick-shelled, decapod crustaceans with a single pair of claws which are used like hands. Crabs live in all the world’s oceans, in fresh water, and on land. Despite having tiny brains, crabs are quite cagey.

Crabs may have emerged as early as the Carboniferous period, though the earliest definitive fossils date from the Jurassic, when the domain of dinosaurs was well established.

Crabs readily master mazes and can remember their way through labyrinths as well as the wiliest animal. “Experiments with insects and crabs have demonstrated their remarkable ability to learn and memorize complex visual features,” related Argentinian neurobiologists Julieta Sztarker & Daniel Tomsic.

Though often crowned with expansive Latin titles, crabs are not noted scholars. Chasmagnathus granulatus is a teensy seashore crab. It leads an idyllic life: digging into the sand for food and doing its best to avoid becoming a meal for a diving seagull, the crab’s nemesis.

Such a seemingly simple lifestyle belies survival needs that conjure considerable cognition. Burrowing crabs have excellent long-term memory: both for good feeding spots, and for places where seagull attacks are more probable. Careful observers, these crabs can discriminate between real seagulls and look-alike decoys.

“These animals don’t have millions of neurons like mammals do, but they can still perform really complex tasks,” observed Julieta Sztarker.

This burrowing crab’s brain is smaller than the point of a pencil; a bitty brain with a tiny fraction of physical substrate to process mentation, compared to mammals or birds. Yet the crab’s mental powers are undeniably sophisticated; quite up to the demands of its lifestyle and then some.

Researchers watched the electrical activity of brain neurons in C. granulatus and came to a fantastic conclusion. “The behavior of the crab was found to be accounted for by the activity of a small number of neurons,” surmised Julieta Sztarker & Daniel Tomsic.

These neurobiologists believed that “a small number of neurons” account for “really complex” behaviors. You would be sensible to be skeptical of such a sophistic denouement: a wise crab, wary of the seagulls of pseudoscience.

The body – indeed, the entire world – is an energetic confection of the mind. Skuttle through the labyrinth of works by Ishi Nobu and discover that as a fact.

“New study reveals that crabs can solve and remember their way around a maze,” Phys.org (22 October 2019).