The world hotting up has made wildfires more frequent and intense. Siberia, which has the world’s most extensive forest, has been ablaze for months.

Along with the Amazon rainforest, which has been decimated by deforestation, the boreal forests which ring the world below the Arctic circle have been the main terrestrial  bulwark against accelerating global warming. Those vegetative protections are being lost at an increasingly clip.

The fires in Siberia were touched off by an unusually hot year, which dried out the soils and melted snow cover unusually early in the spring. The Arctic as a whole had record temperatures from May through June.

“As carbon builds in the atmosphere, the energy needs to be released and that results in more extreme weather,” explained meteorologist Oksana Tarasova. “The biomass burning in Siberia is part of this pattern.”

Siberia is among the regions with the greatest warming. This year’s average temperatures are running at 3 °C above the long-term average.

The fires started right after the snow melted in the Siberian Arctic. British geographer Thomas Smith speculated that the fires might have smoldered throughout the winter – what he referred to as “zombies.”

An unusually warm and dry winter has turned Siberia into a tinderbox. The intensity of some of the April fires in eastern Russia have already dwarfed the infernos of last year, which ultimately roared through 7 million acres and wafted smoke into North America. Last year’s Siberian fire season was the worst year in history – until this year.

“We expect that there could be catastrophic fires in Siberia,” this year said environmentalist Alexey Yaroshenko, adding that wildfire season peaks in July/August. The satellite image of smoke from Siberian fires below understates the acreage that is burning. Some of the Arctic fires have been burning so far north that they border sea ice cover. 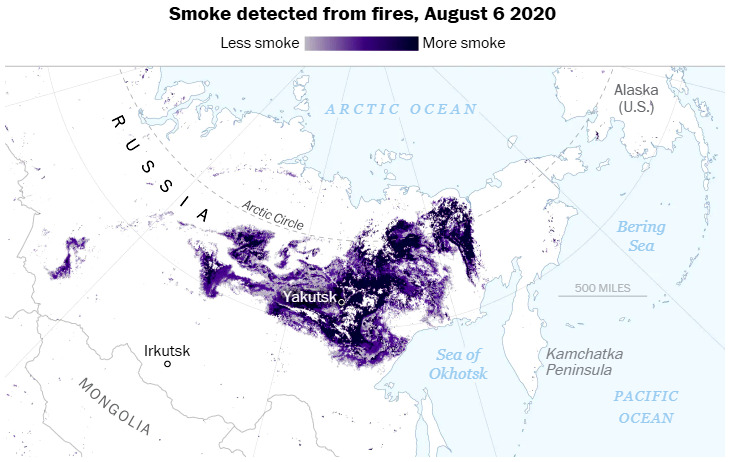 This summer’s massive blazes will help accelerate global warming in a self-reinforcing cycle: from the fires and their emissions, loss of vegetation, permafrost melt, and sea ice decline.

Besides the fires, the extensive permafrost in Siberia is melting, releasing vast amounts of methane, an especially potent greenhouse gas.

Covid-19 has been instrumental in keeping Siberia alight, especially grass fires. “Because people are in self-isolation and don’t go to work, they have more time to go out, especially people in the villages near forests and fields. And they can cause fires,” remarked Russian firefighter Andrey Borodin.

Russia will not be as attentive to wildfires as it has been. Volunteer firefighters that typically go out in groups of 7 or 8 have been told to work in pairs or trios to follow social distancing guidelines. Russia’s finances are in shambles, partly because of historically cheap oil. Russia is a major oil exporter. “Due to the coronavirus and the shock of oil prices, budget revenue fell dramatically,” explained Alexander Osipov, governor of a territory in Siberia. “This year the situation is very complicated, and we have absolutely no time to deal with fires in addition to the virus,” Osipov added.

The Siberian boreal fires are a harbinger for accelerating climate change. “This is the type of fire event that would be described by worst-case modeling scenarios that were supposed to occur mid-century,” said American wildfire expert Jessica McCarty, adding that we may be 30 years early in seeing such fire impacts.

Isabelle Khurshudyan, “Wildfires ravaged Siberia last year. This spring, the blazes are starting even bigger,” The Washington Post (16 May 2020).

Ishi Nobu, “Wildfires,” in The Fruits of Civilization, BookBaby (2019).

Jake Rudnitsky et al, “The world’s largest forest has been on fire for months,” Bloomberg (8 August 2019).