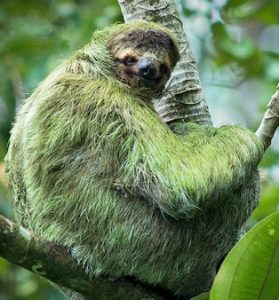 Sloths live an unhurried life, letting them act as lodging for select species. It is a modest achievement for a modest underachiever.

These mid-sized mammals are related to anteaters and armadillos, but they lack their panache. Unlike the ambling ways of armadillos and anteaters, sloths are arboreal.

There used to be ground sloths. They were far more than mid-sized. Some were taller than an African bull elephant: 6 meters long and 5.2 meters high.

The last ground sloths lived thousands of years ago; likely hunted to extinction by men with spears. Their ponderous lifestyle made them easy prey.

A sloth spends much of its life hanging from a tree in a tropical rainforest. Sloths eat and sleep in the trees. They even give birth in a tree. Too lazy to hit the ground upon their demise, some even remain hanging from a branch when dead.

Sloth life is slow because it lives exclusively on leaves, which are chewed with considerable deliberation. Leaves provide scant nutrition, and take a long time to digest.

So sloths compensate by doing a lot of nothing. Sloths have one-quarter the muscle tissue of comparably-sized mammals; another disincentive to a vigorous life.

It was long thought that sloths slept 18 hours a day. It’s hard to tell when no movement is apparent.

As it turns out, a sloth sleeps just 9.6 hours daily. Sloths are diurnal, but move as little as necessary during the day.

When a sloth does move, it does so slowly. Top speed in the trees, trying to escape a predator, clocks at four meters a minute. On the ground, half that at best.

About the only time a sloth is on the ground is to literally lay waste. It digs a hole to urinate and defecate, then covers it up afterwards, so as to avoid giving away its location. Digestion is so slow, a sloth only need go once a week.

Considering their speed, sloths are at risk when on terra firma. But there is greater risk in dropping waste from the trees, as it allows predators to more easily locate them, especially considering how little they move. The only time that sloths let loose from the trees is during a rain storm, when waste readily washes away.

Despite staying in one place, sloths attract little attention. Its only predators are Jaguars and harpy eagles.

Jaguars can climb trees, but can’t reach sloths on the branches that sloths prefer, as these limbs are too slight to support a jaguar’s weight. Harpy eagles, which diet on monkeys and opossums, are able to see and snag a sloth only if it carelessly exposes itself on a ill-chosen branch.

Sloths become a humble ecosystem in their own right. Sloth hairs have grooves that run length-wise, providing lodgment for a variety of algae.

During the rainy season, a sloth turns green, thanks to its algae coating. Vegetation is most lush during this time. Going green helps a sloth better blend in.

outtake from Spokes of the Wheel, Book 2: The Web of Life (pre-publication)