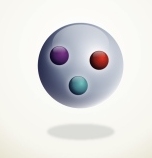 At the heart of every atom stirs at least one proton, created by three hyperactive quarks. Far away bustles a bunch of electrons, orbiting with a complex layering that affords combination with other atoms. From this the stuff of matter is built.

Physicists have been recently startled to discover that the proton has gotten punier. The confounder comes with not knowing why.

In 2010, a published paper put the proton at 4% smaller than previously thought. A more recent experiment repeated the same procedure: bombarding a hydrogen atom with muons, then measuring. This second test probed a different set of atomic energy levels. Same result.

But these recent results don’t jibe with non-muonic techniques, where an electron is used instead a muon. (A muon is an electron’s heavier cousin.)

Either method appears a valid approach. Which is to say both measurements seem copasetic. Hence the conundrum.

Having crawled back over the experiments, combed the data sets, and fondled the models once more, nothing gives. One more subatomic mystery that begs a larger question: is there something fundamentally askew with this worldview? No physicists are taking that bet yet.

Yet there is a good reason to probe further, literally and conceptually. Only a tiny fraction of baryon mass comes from the quarks within. 99% comes from being bound into a hadron. (Protons and neutrons are two types of baryons. Baryons, along with mesons, are hadrons.)

The glue, and heft, that holds the universe together does not exist 4d. Which to say that something fundamental is missing in the Standard Model.