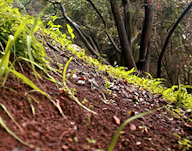 Soil is a significant store of carbon. Warming soils will release more CO2 into the atmosphere than previously supposed, accelerating global warming well beyond what current climate models predict.

The thin skin of soil that covers much of the land stores vast amounts of carbon: more than in all the plants and the atmosphere combined. That carbon feeds hordes of bacteria and fungi, which put some of it into more microbes while respiring the rest into the atmosphere as carbon dioxide. Many of these microbes grow more active as it warms, increasing their digestion and respiration rates.

“Tropical forests have a large role in the global carbon cycle because they exchange more CO2 with the atmosphere than any other ecosystem, contain roughly 2/3rds of terrestrial plant biomass and harbour a substantial fraction of global soil carbon. Between 30% and 50% of the carbon respired from tropical forests originates from soil, most of which is derived from the decomposition of organic matter. Thus, even a small increase in respiration from tropical forest soils could have a large effect on atmospheric CO2 concentrations, with consequences for global climate,” reports British geoscientist Andrew Nottingham and his colleagues.

Whether in the Arctic, temperate biomes, or the tropics, warming soil spells increased carbon release. This owes to several factors. Soil typically dries as it warms, either reducing respiration in aerobic soils via less water or increasing respiration in waterlogged soils by increasing oxygen supply to microbes. Warming can also affect respiration rates by altered biotic processes, including changes in microbial communities or reducing nutrient availability to decomposers which are instrumental in maintaining soil viability.

Topical soils will warm at least 3 °C by century’s end. That dirt will release 55% more carbon than it would if it had not been baked – more than 6 times the annual emissions from all human-related sources.

Current climate models consider tropical soils to respond weakly to warming, and therefore insignificant to global hotting up. On this the models are sorely wrong.