Spiders don’t have ears. They listen through their legs.

Spiders catch prey in a variety of ways. Some entrap their victims in woven webs, waiting for the dinner bell to ring though singing silk. Other spiders run down their prey on foot.

Somewhere in between are nocturnal, ogre-faced, net-casting spiders that actively capture their food while suspended withing a frame web. These spiders are in the Deinopis genus. Deinopids live on every continent except Europe and Antarctica, residing mostly in the warm biomes of Latin America, Africa, and Australia. 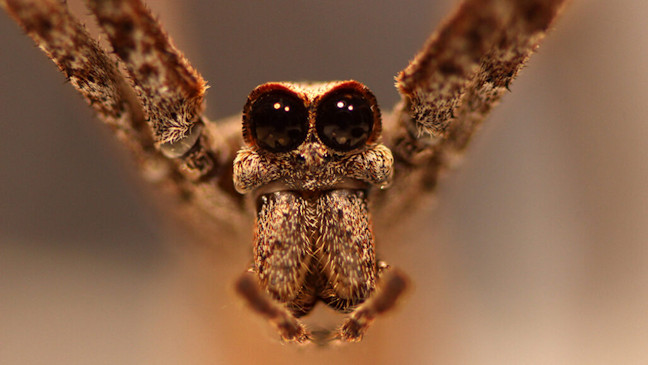 Using a net held between their front 4 legs, deinopids lunge downward to ensnare prey from off the ground beneath them. This forward strike is made using a huge pair of hypersensitive eyes that can see in the dark. To assist their aim in netting prey, these net-casting spiders strategically place white fecal spots on the ground. 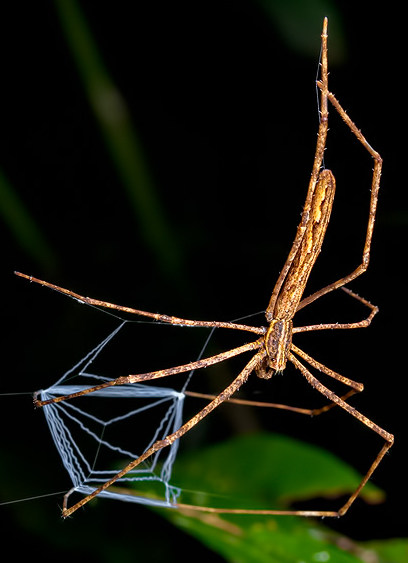 Using a backward strike, ogre-faced spiders can also intercept flying insects: a ballistically rapid, overhead back-twist that relies on hearing rather than sight. “They can obviously catch things out of the air just using sound,” marvels sensory ecologist Jay Stafstrom. A deinopid can hear an insect coming from over 2 meters away.

The hairs on spider legs act as ears, sensitive to frequencies from 10 hertz to 10 kilohertz. (Nominal human hearing is 20 Hz to 20 kHz.) The vibrations of individual hairs are collated into a directional sound within the mind: an astonishing feat.

Prey signals tend to come in at lower frequencies. Being able to hear at higher frequencies helps avoid predators, such as birds.