Spittlebugs are the nymphs of froghoppers. The nymphs are better known, as gardeners consider them especial pests.

Along with looking a little like their namesake, froghoppers earned their name from their impressive jumping skill in eluding predation. 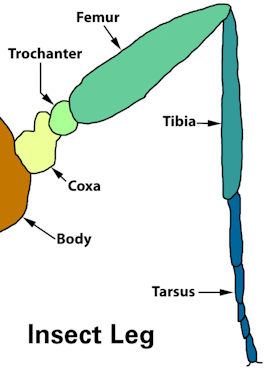 Many insects power jumps through simultaneous leg exertions, though the muscles vary. Fleas, for example, use the trochanteral depressor muscles whereas locusts and bush crickets use the tibial extensor muscles. Planthopper nymphs evolved a unique gear that keeps their legs synchronized when they leap via a breaststroke motion.

Short-legged insects, such as the flea, employ a catapult mechanism in which muscles contract slowly, with the force generated stored in elastic elements of the skeleton and then suddenly released. Some insects, such as locusts, combine energy storage with long legs.

Though short-legged, froghoppers manage extraordinary acceleration in their leaps. Following attitudinal positioning of all their legs, froghoppers evoke a rapid, simultaneous depression of both hind legs before powering an explosive takeoff. The first, key movements of the hind legs are a rapid depression of the trochanter with an accompanying extension of the tibia.

A froghopper may accelerate at 4,000 m/s2 over 2 mm as it jumps – experiencing over 400 gs of acceleration. Froghoppers can leap 100 times their length. Fleas are 2nd-rate by comparison. The force that froghoppers exert at take-off is over 400 times their body weight – much higher than fleas (~135 times), locusts (~8), and humans (~2-3).

Spittlebugs don’t jump. The nymphs instead take a sedate strategy to being left alone. Spittlebugs encase themselves in a protective camouflage foam which distinctly resembles saliva – whence their title, and their enclosure called cuckoo spit, frog spit, or snake spit – even as these namesake creatures are not notorious spitters.

Spittlebugs feed on the plant fluids that course through xylem, but not on sap. Xylem sucking is no easy task: requiring extraordinarily strong pumping muscles, as a spittlebug is working against gravity to pull liquid upward from the roots.

Xylem fluid is no superfood either. The only reason spittlebugs can live off it owes to 2 symbiotic, complementary bacteria that reside in their guts, providing glucose and synthesizing a full set of amino acids, thereby filling out the nutritional void of xylem.

Microflora support withstanding, a spittlebug has to drink enormous volumes to get enough nutrition. A spittlebug can pump up to 300 times its body weight in xylem fluids in a single hour. Unsurprisingly, drinking that much fluid means spittlebugs copiously urinate. 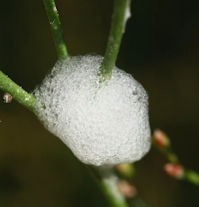 Spittlebugs repurpose their waste into a nest. A spittlebug rests head down. As it excretes spent xylem juice it mixes in a sticky liquid secreted from abdominal glands. Air is mixed in using caudal appendages, giving the refuse a foamy appearance. The spittle flows down over the bug’s body, hiding it. Spittlebugs sometimes shelter together in a communal froth.

The spittle does more than hide the bugs. It also provides a high-humidity microclimate that shields spittlebugs from punishing raindrops.

When a spittlebug nymph finally molts into a froghopper, it leaves its spittle nest behind, ready to leap into adult living.