Spokes 1: The Science of Existence  (Table of Contents) {Notes} 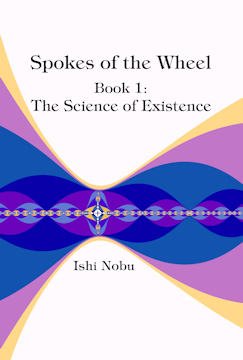 The Spokes series starts with the unfolding of the universe. After considering the cosmos, Spokes 1 settles on Earth, where its structure is explained.

From the chapter on The Universe:

The explanation for how the cosmos got from nada to now involves filling in big blanks between what can be observed and what happened from the supposed onset of the universe. As most of the universe is beyond view and measure, astrophysics is necessarily guesswork, and much of the guessing has been laugably bad. The prevailing cosmological model is wrong on all key aspects, including the age of the universe, cosmic inflation, the cosmological principle, dark matter, and dark energy.

The foolishness of conventional cosmogeny begins by assuming that this universe started with our detection of the earliest light. There is no reason to think that the cosmos began with stars lighting up. Instead, this universe is probably hundreds of billions years old, with a dark beginning and a long, shadowy weaving of energy/matter patterns before turning the stellar lights on.

From the chapter on Physics:

Inquiry into the nature of radiation ushered in modern physics: a post-Newtonian conception. Following along the lines of earlier work by others, Albert Einstein contemplated the speed of light and envisioned discrete quantities (quanta) of electromagnetic radiation, in papers published in 1905.

The onset of modern physics came from poking holes in classical descriptions, finding them lacking when considering the cosmic or infinitesimal. The irony of modern physics has been in creating new holes that brings physics knowledge to its limits; a demonstration of how little really is or can be known about the nature of reality.

From the synopsis of the Physics chapter:

Einstein was simpleminded in considering the cosmos comprehensible. The human mind makes sense of what it can and leaves the rest behind; rendering an illusion of apprehension by omission of what is not understood or not believed.

“Physicists have come to see that all their theories of natural phenomena, including the ‘laws’ they describe, are creations of the human mind; properties of our conceptual map of reality, rather than reality itself.” ~ Austrian physicist Fritjof Capra

All theories amount to nothing more than mental maps. Whereas physics has progressed by questioning assumptions, the failure to understand the nature of existence lies in mental maps which take for granted what should not be assumed.

From the section on Water Properties in the Chemistry chapter:

Pure water is an odorless, tasteless liquid, with a bluish tint observable only at a deep volume. Water is transparent in the visible spectrum, but strongly absorbs both infrared and ultraviolet light.

Water is so commonplace that it is regarded as a typical liquid. Water is anything but.

Water is one of lightest gases. Liquid water is much denser than expectable. Water’s solid phase – ice – is surprisingly featherweight in light of its liquid form.

Water can be extremely slippery and exceedingly sticky simultaneously. This slippery/sticky behavior is how the feel of water is sussed. There is no direct sensation of moisture.

Every body of water, from droplets on to more voluminous realms, is an intricate viscoelastic system, with an underlying extended structure governed by quantum forces; whence water’s enduring mystery.

“Although water is one of the simplest molecules, it is in reality a very complex liquid displaying more than 64 counterintuitive anomalies, most of which have not been adequately explained.” ~ Italian physicist Francesco Mallamace et al

From the section on Pseudoenzymes:

Every cell produces a significant number of enzymes which appear to be inert. Of the 518 enzymes that are supposed to catalyze proteins involved in phosphorylation – protein kinases – about 10% seem to be duds, as they lack key amino acids to act as catalysts.

The researchers who discovered these pseudoenzymes in 2002 were shocked. “We thought we must have got it wrong,” fumed American geneticist Gerard Manning.

The DNA which delivers dead enzymes are not degraded. Those protein-producing sequences have hardly changed over millions of years.

Instead of catalysts, pseudoenzymes are employed in a variety of other roles. Some help “true” enzymes do their job by shoving them into the correct shape. Some provide a venue where proteins can mingle. Some latch onto receptors to help cells communicate. Some act as bodyguards, escorting another protein to a work site.

From the chapter on Life Begins:

The parameters surrounding the origin of life on Earth are known. The geological conditions have been discerned, the requisite chemistry understood, the timing apprehended. Yet life’s onset retains mystery.

What is not yet known is exactly how and where the ingredients that spawned life came together with the spark that started life’s engine, though good guesses have been made. The enigma that lingers lays in life’s spontaneous generation: the force of coherence that led life to coalesce.

Life on Earth began as soon as environmental conditions permitted. The mathematical probability of elements randomly assembling into a metabolizing, self-replicating life is astronomically small. Yet it repeatedly happened, with nary a chance that it was happenstance.

From the section on The Evolution of Eukaryotes (in the chapter on Cells):

As the Earth and its atmosphere were transformed by cyanobacteria, viruses promoted prokaryotic evolution by providing genetic uploads.

2.5 billion years ago, eukaryotes arose. The first step to eukaryotic life was through unification: one prokaryote incorporated another. The host was an archaeon.

An intracellular bacterial parasite gave rise to the mitochondria found in all eukaryotic cells. At some point, the bacterium that beget mitochondria became benign, then mutualistic. The mitochondrial bacterium went from stealing ATP to providing it.

This sort of transition is not unusual. Viruses go from devastating to their hosts to being tolerable, as they learn to prolong their residency by not inflicting untold damage, and thereby benefit from host longevity.

From the chapter on Cells:

It is critical for cells, whether microbial or part of a larger organism, to adaptively configure their biochemical operations to current conditions. Cells do so through a host of measures, including altering protein production and self-manipulating their DNA. All cells intelligently manage their lives at the molecular level.

From the chapter on Genetics:

Genes are often described as if they are linear sequences, awaiting ready decoding as construction templates for useful products. Nothing could be further from the truth. The genetic coding schema defies easy characterization because it defies topological comprehension.

Individual chromosomes occupy distinct territories in the cell nucleus. Where they reside, and what other chromosomes are in the neighborhood, can strongly influence whether the genes in a chromosome are active, and how a cell functions.

The definition of gene is non-specific for good reason. A gene is conceptual, not an actual entity: a term for the information encoded within polynucleotides. Genes don’t exist. They are only construals in the minds of geneticists.

The term geneis used as if the recipe and result were synonymous. They are not. Research into epigenetics has shown that genes as an adhered-to rulebook represents an inapt simplification.

From the section on Gene Editing:

Gene editing can have profound, unforeseeable consequences to an ecosystem. This has already occurred with the industrial agriculture which relies upon genetically modified organisms.

New problems with gene editing keep being found. Geneticists manipulate genetic codes despite knowing next to nothing about the processes underlying genic employment and repair by cells. The genetic modifications publicized in mass media are only of success, which are a minuscule fraction of attempts to play with the essential ingredients of life.

Life begins in Spokes 1. Spokes 2 continues with an exploration of life on Earth.