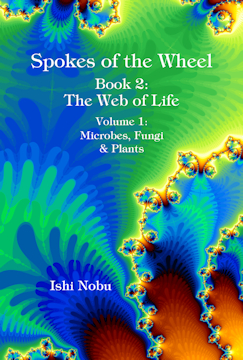 Spokes 2 celebrates the diversity of life: the biospheric stage; the lifestyles of the large and small; how communication is essential to all, as ecology defines quality of life. Through stories of many species, Spokes 2 explores the gyre of biological being.

From the chapter on The Web of Life:

The intelligence of the earliest and most primitive life is conceptually the same as the highest cognition, however that might be defined. Both are based upon sufficient awareness for discriminability.

The most primitive cognition is electrochemical: reacting differently to different chemical compounds. This makes perfect sense when considering that chemistry begat biology; that life originated via sequences of consistent chemical reactions, and that life sustains by cogent memory, in the broadest sense, of requisite reaction sets.

From the section on Biota:

Microbes ubiquitously have symbiotic relationships with macrobes, in every variety: mutualistic, commensal, and parasitic.

All complex organisms (macrobes) are cellular colonies, living symbiotically with microbes as a symbiorg. Every plant and animal comprises a community: a host living in concert with a microbiome.

From the section on Deception:

Every organism, and every facet of its functioning, evolves toward optimization. Efficiency comes from making the best use of limited resources. A wondrous aspect of biology is its high degree of coherency.

The flip side of efficiency goes beyond making the most of something: getting something for nothing. Deception is the means.

The botanical kingdom is rife with beguilement. 5% of flowering plants entice pollinators via various ruses. Others deceptively attract insects for their own consumption.

Carrion flowers, which smell of rotten meat, attract scavenging beetles and flies, which it then slathers with pollen.

Passion vines, beloved by some butterflies as food for their caterpillars, have yellow spots on their leaves that look as if eggs had been laid by a gravid female. This puts the butterflies off from laying their own eggs, as they suppose there will be too many larvae for the plant to feed.

Numerous carnivorous plants lure insects with sweet odors, only to devour them.

From the section on Mushrooms:

A minute fruiting body forms as a first stage. A small button follows in the next stage. Once button staged, a mushroom can rapidly absorb water from its mycelium and expand, mainly by inflating preformed cells which took several days to form. While such mushroom fruiting bodies are short-lived, the underlying mycelium may be massive and enduring.

Not all mushrooms quickly mushroom. Some grow slowly, adding tissue by growing from the edges of a colony, or by adding hyphae.

The oldest organism in the world was a humongous fungus: 2,200 years old, in over 9.7 km2 of soil, in an eastern Oregon forest. Then logging roads cut it up.

From the chapter on Plants:

Animals cannot behave through bodily transformation, nor do they behave by chemistry demonstrations, communication aside. In contrast, phenotypic plasticity and chemical production predominate plant behavior.

Plants intake, process, store, integrate and retrieve information, applying intelligence to make decisions. Because plant behavior is largely chemical and phenotypic, the number of choices that a plant at any moment has dwarfs any analogy of animal behavioral options.

From the section on Medicinal Plants:

When plants first colonized land they were likely to be eminently edible. These plants were the great draw for the evolution of land animals.

Self-preservation meant protection. Plants concocted a cornucopia of complex chemical compounds for a vast variety of intents, many having effects beyond the plants themselves, either to the benefit of collaborators or poisoning their ingesters. This launched an evolutionary race of increasing sophistication in both plant protection and animal digestion.

Microbes and insects were plants’ primary targets. Early on, plants and some microbes made peace by mutualism. Flowering plants would do the same by domesticating pollinating insects.

But the majority of intruders into a plant’s life cycle were pests. In due time, plants’ chemical armor would serve higher animals afflicted by the same species that had been nemeses to plants.

While plants used animals for their own purpose, turnabout in time meant that the secondary metabolites intended to fend off predation became a compelling reason for animals to consume plants. Medicinal plant use by humans is a conclusion in terms of animal evolution.

Plants have always been the foundation of human medicine. Before laboratory synthesis developed in the late 1800s, 80% of the substances used to cure diseases were plant-derived. Plants still account for some 40% of the drugs taken, and the inspiration for most others. 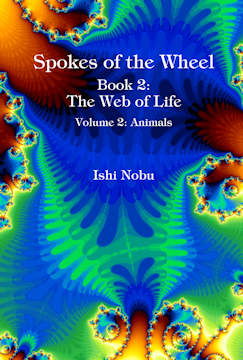 From the chapter on Animals:

The term animal comes from the Latin animalis, meaning “having breath.” Breath may be slight.

One nematode, Halicephalobus mephisto, thrives with scant oxygen in deep fracture groundwater that is thousands of years old, up to a depth of least 3.6 km. These little black worms, 0.5 mm long, withstand crushing pressure and searing heat to feast on the biofilm bacteria deep down. There is a functioning biosystem there.

Breath does not distinguish animals from plants. Plant pores (stomata) have a regulated cycle of breathing in carbon dioxide and exhaling water vapor.

From the section on Aspects of Existence:

Social aggregation has its benefits, but it also imposes a significant cost: concentration creates resource competition. But there can be compensation for the crowding. Being in on the rumor mill yields tips on the best eating places.

Microbes move in optimized motion patterns to collect nutrients. They share intelligence with others on prime feeding locations.

Instead of scrounging for a living, many bacteria make a smart trade-off in choosing the comfort of host-based living: regular feeding, perhaps in return for modestly helping the habitat, such as digesting what got eaten. Life can be quite good in a microbiome: the company of fellows and regular meals.

From the section on Cooperation:

Living is an opportunistic exercise. Cooperation happens when it aligns with self-interest. The subtle issue inherent in such alignment is how self-interest is perceived.

Cooperation can be empathy in action. An animal may emotionally identify with another, which may be as simple as similarity in predicament.

From the section on Intelligence:

Goal-oriented behavior exists in all life: from viruses on up. Achieving goals requires intelligence, which necessitates the cognition of abstractions that appear as symbolic representations of situations.

In infecting a host, a virus employs mental templates of the chemical signatures that are the target of their goal-directed behavior. Comparison necessarily involves abstraction.

Every thought is necessarily symbolic, with objectified tokens that signify something that naturally evokes emotive qualities: either attraction (desire) or repulsion (fear). These 2 poles define the spectrum of developing goals from which behaviors emerge.

As mentation is of patterns directed at goals, the mechanics of analysis are selfsame, whether of molecular structures or social organization. Flies remember their destination even when distracted. Social wasps and honeybees recognize faces the same way as humans. Sea lions possess the same facility for symbolic logic processing as people. These are but a few known examples from research, which should be considered indicative of a ubiquity of acumen.

The mind of every organism is a symbolic processor, capable of situational recognition in light of survival goals. This capability – employing languages for living – is innate in all life.

Spokes 2 surveys the wondrous diversity of life. Spokes 3 continues with how life evolves.