Spokes 3: The Elements of Evolution   (Table of Contents) {Notes} 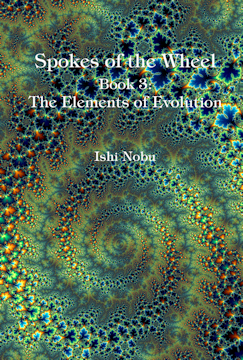 The history of Earth reveals how evolution unfolds through time. Simple life held sway for much of the planet’s history. Mammals became major actors only after dinosaurs left the stage of life. From an evolutionary perspective, the rise of hairless apes happened in a heartbeat.

In the context of life’s legacy on Earth, Spokes 3 explains the elements of evolution. Evolution is coherent adaptation, not a competitive exercise in random mutation as Darwin believed.

Spokes 3 chronicles the roots of hominins, and traces the path to the emergence of humans. The book closes with early civilizations creating the patterns of polity that would continue to the present day.

From the chapter on Life’s History:

Earth has witnessed a staggering array of biota, beyond imagination in variety. This proliferation derives from evolutionary impulse to diversely adapt: to fit into niche habitats, so as to optimally exploit available energy resources.

But environments change, often dramatically. The causes are various, but all ultimately involve changes in temperature and the availability of water.

From the section on Birds:

Birds became itty-bitty by truncating the juvenile growth spurt that gave dinosaurs their girth. The shrinking process started 210 MYA and proceeded apace for 50 million years. This appears a reversion evolution back to the earliest dinosaurs, who were quite small.

Miniaturization afforded flight and novel ecological opportunities that went with it. Besides the aerodynamic advantage of carrying less weight, smaller animals can flap their wings faster than large ones.

After growth slowed to keep size down early in their evolution, avian growth sped up again, to rates even faster than the extinct dinosaurs they descended from. This lets a bird mature quickly. By the end of the Cretaceous, a bird the size of a sparrow could grow up in a week’s time.

From the chapter on Evolution:

A fundamental misunderstanding behind natural selection is that evolution is necessarily competitive: Darwin’s imagined struggle to “survival of the fittest.”

Evolution via competition would eventuate in a dearth of the population diversity which is characteristic of every species of organism. This fact alone dispels this crucial factor in Darwinism.

Evolution is not inexorably the product of competitive selection. Instead, speciation is adaptive, not some hit-or-miss selection process. Populations do not diverge from variation to speciation as a potential suicide pact.

Though every population faces survival pressures, adaptation is not a species competition, with a winner among losers that go extinct. If that were the case, chimps and other great apes would be extinct, leaving only humans. And there would not have been several hominid species during the descent of the human races.

On Perception, from the chapter on Evolution:

Perception is the fundamental mechanism of the mind to function in the world. The process begins with sensation: the collation of sensory stimuli. Perception starts by turning sensations into symbolic representations. These symbols are then identified using memory and categorization: generalizing specific symbols into classes via hierarchical pattern-matching. The hierarchy of classification is based upon priority of utility: which categories are most useful, based upon knowledge which may be inborn or learned.

Perception concludes by deriving the meaning of the identified symbols, especially with regard to affinity or avoidance. What to eat, and what not to get eaten by, are illustrative.

Learning applies to the conceptual constructs derived from perception which evolve into “purer” abstractions that are only remotely related to actuality – sometimes so distantly so that the connection is obscured. Learning is the evolution of a mind.

The greatest risk of perception is misidentification: to mistake what is for what is not and vice versa. Confusion is commonly generated during the generalization stage, while categorizing.

“Perceptual generalization in any efficient communication system will necessarily follow an exponential function of the cost of perceptual error.” ~ Chris Sims

The information channels of sensation are limited by type and quality. Certain organisms can see, but not very well. They compensate by having a keener sense of chemistry (e.g., olfaction), touch, or audition. Many sensations are a confluence of sensory inputs.

Altogether, adaptation drives at perception capabilities which best suit the environment in which an organism lives, with the minimal overall sensory distortion that permits workable perceptual acuity.

“Sensory adaptation is reflected in static and dynamic characteristics of sensory performance. Viewed statically, sensory systems are highly selective: their sensitivity varies across stimuli as if they favor certain stimuli over others. Dynamically, stimulus selectivity varies across time; it is modified when the environment changes.” ~ American vision scientist Sergei Gepshtein

Regarding sensation, the parameters of evolution are constrained by physics, biochemistry, economies of biological production, and fitness within the phyla (body plan). That withstanding, to think just in terms of physical senses under-scopes the issue of perceptual adaptation.

The mind compensates for deficiencies in sensation via a variety of heuristics, including reliance on knowledge as a basis for probabilistic assessment. Sensation and perception both involve learning, most markedly during early development.

Whereas biological structures and behaviors are all that may be observed, the real work of perception is done in the mind, and so is as much a focus for adaptation as biomechanics.

From the chapter on Human Descent:

The emotional stature of apes and hominins is identical. Apes have an innate capacity for empathic kindness, as do many other animals. Conversely, when provoked, chimpanzees have a capacity for savagery that is positively human.

There was slight difference in intellectual capacities between chimps and early hominids. Even now, the working memory of chimps outperforms humans.

In essence, culture represents shared symbolic expression: an exhibition of abstraction in a social context. The earliest hominids had culture, just as other social animals do.

From their advent, sociality defined the success of hominids. Language was the key facility. Early on, hominids shed the sharp, pronounced canine teeth which apes use as a threat signal.

From the chapter on Early Human History:

Agriculture radically modified the habitat. In the fertile but arid regions of the Levant, where crops were first grown, irrigation succored cultivation, affording surplus food production.

War drove human social evolution. Societies evolved from small groups, which were integrated by face-to-face cooperation; their cohesiveness reinforced by the need to further consolidate and defend local resources.

From the section on Cultural Crops:

The specific crops cultivated during the Neolithic shaped sense of community. Wheat was common in the Near East and north China.

In southeast Asia, south China, and Japan rice became the predominant grain. Rice was domesticated in China ~9,000 years ago.

Before mechanization, growing rice took twice as many hours as wheat. To deploy labor efficiently, especially at times of planting and harvesting, rice-growing societies developed cooperative labor exchanges. Neighbors staggered their farms’ schedules to assist each other during these crucial periods.

A collective outlook took root in rice-growing cultures. That sense of cooperative interdependence lingers to the present day, with the Japanese, Vietnamese, and Korean people as exemplary.

Cultures which relied upon wheat and other crops which could be independently grown led to a sense of individualism. This is most apparent in the Fertile Crescent, which birthed a variety of flinty peoples.