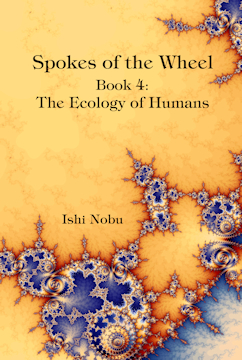 The body is our instrument to sense and experience the world. This tool’s abilities must be honed and maintained to enable full appreciation of life.

Spokes 4 provides an overview of bodily interfaces with others, both within us and without. It explains how the raw material by which the mind fabricates a sense of reality is amassed. Spokes 4 closes with a primer on physical health.

From the chapter on Human Biology:

The human body is a rich ecosystem, a vast collective of microbial life. Over 90% of the cells that a human lugs around are microbial.

At the cellular level, a human is a world unto itself. Our bodies are in symbiotic relationships with microbes to guide development, for digestion, defense against pathogens, and many other functions.

From the chapter on Intelligence Physiology:

The animal intelligence system is distributed. Numerous functions are coherently autonomous, but the whole is greater than the sum of parts in making sense of the world.

Organs and glands have some autonomy in meeting the needs of the body parts they serve. Subconscious processes that alter under stress – such as heart rate and respiration – are regulated for readiness. The digestive system has its own intelligence system in accomplishing tasks essential to nutrient intake.

From the section on The Energy System:

“Our own physical body possesses a wisdom which we who inhabit the body lack.” ~ American writer Henry Miller

Every organism, even those lacking an apparent nervous system, has an analogous electrochemical network. These systems are emblematic of the energy permeating Nature.

Bioelectrical states are merely the observable subset of an organism’s energetic experience.

“We human beings consider ourselves to be made up of “solid matter.” Actually, the physical body is the end product, so to speak, of the subtle information fields which mold our physical body as well as all physical matter.” ~ Czech-born Israeli-American scientist Itzhak Bentov

The lengyre is the life-force energy gyre that interfaces the physical body via the electrochemical network into extra-dimensional entanglement. Traditional Chinese culture and medicine refers to a lengyre as chi (qi), albeit without direct reference to extra dimensions (ED). The term subtle body is also used for the life-force energy system.

People experience lengyre sensations – their own sense of “energy” – but make no attribution as such because this knowledge is not acknowledged under the facile matterist regime of empirical science. Hence few people are consciously aware of their lengyre, and even fewer appreciate the information provided by the lengyre.

People conscious of their lengyre are sometimes ad-mired for their sensitivity and prescience. Typically, people in post-industrial cultures who acknowledge what they know about the life force are considered “not all there” while actually being more there than most.

“There is a vitality, a life force, an energy, a quickening that is translated through you into action.” ~ American dancer and choreographer Martha Graham

From the section on Acupuncture:

Disordered vortices form in the body when the flow of energy is disrupted. Stimulating these points can unblock or strengthen energy flow.

Acupuncture is best known for alleviating pain. It is routinely used in China as an anesthetic during surgery.

As with all treatments, acupuncture has limits of efficacy. For chronic disease, if the patterns of behavior that led to dissipation are not changed, acupuncture provides only short-lived relief.

From the section on Extra-dimensional Communication, the topic of The Feeling of Being Watched:

The senses extend beyond those that can be accounted for by physiological organs. This is a natural aspect of energetic existence.

The most common demonstration of extra-dimensional communication is the sense of being stared at. Most adults – 75% of Americans, and 97% of Europeans – have experienced the sense of being looked at from behind, then turning around and finding it so.

Some pet owners claim that they can wake their sleeping cat or dog by staring at them. Numerous hunters and wildlife photographers get the sense that animals detect their gaze from afar even when they are well hidden. Conversely, some report having felt that they were watched by wild animals.

The evil eye is a cultural ubiquity: mentioned in the Bible as well as many other ancient texts.

“The influence of an evil eye is a fact.” ~ Islamic prophet Muhammad

From the chapter on Health:

The human body is both resilient and fragile. Wounds heal as damaged cells are replaced, though one almost never heals from damage completely.

Alas, most humans take for granted the body’s resilience, and pay insufficient heed to its fragility.

From the section on Meditation:

Meditation is a practice of profound repose that can lead to a unique state of consciousness: transcendence. While meditation is suffused with religious history, its practice is so ancient and natural that it is likely to have been instrumental in the cognitive evolution of humans.

The benefits of regular meditation pervade the system: improving mind-brain functioning, mood, and tolerance to pain; reducing anxiety and stress, both physiological and psychological.

From the section on Caffeine:

Plants put caffeine in their seeds, leaves and fruit as an insecticide. Flowering plants lace their nectar with a touch of caffeine as a reward memory perk for pollinators.

In humans, caffeine is a stimulant, affecting several neurotransmitters. It is the world’s most widely consumed psychoactive substance; legal and unregulated throughout the world, with rare exception.

Tea is the stuff of legend in China. The great and powerful Emperor Shénnóng is credited with its discovery.

History is also shaky about coughing up the first coffee consumer. The earliest credible cup of evidence is in the mid-15th century, of Sufi Muslim monks in Yemen brewing their own. From its origination, probably in Africa, the bean traveled to an enthusiastic audience at every stop.

From the section on Cannibis:

The term marijuana originated in Mexican Spanish and immigrated into the English lexicon along with the Mexicans who brought the weed into the United States in the late 19th century.

Cannabis is consumed for its mood-lifting and relaxing qualities. Unwanted side effects include dry mouth, red eyes, impaired motor skills, anxiety, and paranoia.

Smoking cannabis presents the same health hazards as tobacco regarding tar, carcinogens, and damage to the respiratory and cardiovascular systems. Then cannabis adds more health detriments than tobacco can muster.

Cannabis is addictive. Continued use is a formula for cognitive decline, loss of motivation, negative emotionality, aggravation of mental illness, and risk of psychotic symptoms, particularly paranoia.

“Marijuana use has damaging influences in the brain, particularly regions important in memory and learning.” ~ American psychologist and neurobiologist Elisabeth Jorandby

“Cessation of cannabis use produces a rapid and significant benefit in people’s ability to learn and remember information in their daily lives.” ~ English psychologist Tom Freeman

In short, marijuana makes you stupid and grouchy to boot while pilfering your physical health.

Spokes 4 explains the bodily repository of intelligence. Spokes 5 explores the power of the mind.