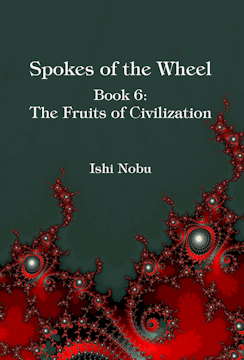 Humanity shaped the world to its ends. Now, to our consternation, the world itself reacts to the fruits of civilization.

Spokes 6 surveys the development of crucial technologies which have shaped civilization. Then follows an exploration of economics, including its historical course, economic thought, and the situation now. Spokes 6 concludes with a review of the environmental impact humanity has had, thanks to technology and chosen way of life.

From the chapter on Technology:

Technology typically has externalities: consequences beyond intended purposes. Effects range from environmental to cerebral and societal.

Culture and technology form an entangled gyre. Just as a society may engender or discourage engineering, technological development drives the evolution of social norms and mores. Some of this is intentional. Most is not.

From the synopsis on Software:

Software is entirely a mental construct. A software program’s quality reflects the acuity of its developers.

Difficulties in maintaining programs drove the evolution of software languages, the designs of which have often been maladroit. The employment of ersatz languages, such as C++, begat software systems which are slow, glitchy, and difficult to use because they are difficult for their developers to maintain.

The World Wide Web illustrates a stunning lack of vision in software design. Web pioneers failed to recognize the basic need for a flexible page-description language. Further, scant thought was given to security, so web pages evolved to be masses of scripts, with surreptitious surveillance and malware commonplace.

From the section on Economic History:

Trade was the lubricant which invariably led to concentrations of economic and political power into a small minority of hands. Rulers came to rely up growth as a means to maintain, and augment, their supremacy.

When internal limits were hit, expansion created conflicts with neighbors. This trend was ubiquitous.

From the section on Industrialization:

With the advent of industrialization, life for workers became dire, both in the factory and at home. British cotton textile workers succumbed to lung diseases from the dust generated during production. This was typical of working hazards, which were multifarious.

Under the crushing wheel of industrializing capitalism, those with craft skills lost their livelihoods; replaced by poorly paid, unskilled workers at unsafe machines. 70–80 hours per week labor was the norm, and many worked over 100, with just half of Sunday off.

Laws to protect workers were nonexistent. Men rebelled so frequently that factory owners took to hiring women and children, subjecting them to horrendous working conditions.

The urban working class lived in crowded hovels, sometimes 15 to 20 in a room. Hundreds typically shared a single toilet.

Workers died off like flies. In poor areas of Manchester, England, life expectancy was 17 years: 30 years less than what it had been for the English before the Norman conquest, 9 centuries earlier.

This privation was according to plan. The economic thinking that dominated Europe from the 16th century was that poverty was instrumentally beneficial. Albeit miserable for those caught in the merciless grip of the market system’s “invisible hand,” plentiful cheap labor was what kept the economic engine humming – to the great benefit of investors and industrial masters.

Not until the 1990s did economists manage to fashion a coherent theoretical framework which suggested that high levels of poverty might be an economic drawback.

In the early stages of industrialization, the substitution of coal for charcoal and wood, and the introduction of the steam engine – for mining, manufacturing, and transportation – made all the difference. This large leap in power also produced prodigious amounts of pollution. It concommitantly created, much later, the perception of a trade-off between growth and environmental quality, with growth always winning, at least until the environment had been made obviously uninhabitable. Then the false issue became one of sustainability: how much rape could Nature take before it became unlivable.

With greater power resources, the use of processed metallic ores became manifold. As chemical science advanced, synthetic materials took an ever-increasing prominence. This too created a pollution problem, in production and especially after consumption. Synthetics were often created for their durability, which meant that they were not biodegradable.

Garbage grew exponentially in scale from consumption-driven growth. But its disposal raised no fuss greater than in earlier times.

One of the most salient points to be made about the nature of capitalists, the exploitative evil of which was most obvious during industrialization, is that most put up fierce resistance to reform. This same objection to decency remains apparent today, with concerted efforts to block regulations which may protect workers, consumers, or the environment.

From the biography of Karl Marx:

Historically, Karl Marx was a counterpoint to Adam Smith. Yet both started from the same base, sharing the obvious observation that homo economicus is rapacious by nature.

But their conclusions as to what to do about it were diametric. Smith would do nothing, while Marx advocated an equitable society.

From the section on Corporations:

Shareholders own corporations, and managers typically run their corporation in pursuit of shareholder perspective. The problem is that shareholders don’t have a company’s best interest at heart. Shareholders often insist on strategies that maximize short-term profits. A manager who does not abide this short-termism is likely to be booted, especially during turbulent times, when foresight is most needed and least appreciated.

Shareholders are the most mobile of a company’s stakeholders: they may sell their shares at any time, disabusing their financial investment in the wink of a trade. In contrast, the other stakeholders – managers and employees – are vested with their livelihoods. Their interest is in the company’s abiding well-being, so that they may continue to earn a living, and do so decently.

From the chapter on Economics:

Conventional economists universally take growth and profit as laudable. The psychological and sociological costs of materialism are unconsidered asides.

Part of this owes to economic models ignoring time. Instead lays the assumption that everything occurs in equilibrium. But equilibrium is nothing more than a mathematical fiction that is never attained.

Instead, the dynamics ever in play are waste, unemployment, and other dislocations. These are brushed aside as “externalities.”

From this comes a conventional creed of balderdash softened into spurious sensibility: that capitalism is not perfect, but only tinkering at the edges need be applied. Incessant corruption and profiteering are relegated as coming from the proverbial “few bad apples,” or lapses in oversight. Blaming government for the inherent excesses of capitalism is a ubiquitous sport.

Economists commonly treat poverty under the maxim that “a rising tide lifts all boats.” Growth is always the recommended solution. This perspective has been properly termed “trickle-down economics.”

From the section on Environmental Impact:

From hunting megafauna in prehistory to deforestation to create arable acreage, humanity has had lasting impact. Indeed, from the tropics to the boreal, forests were never pristine, nor animal populations left untouched; all were attacked by man since his emergence.

From the section on The Green Revolution:

The Green Revolution spread agricultural technologies that were known but not widely implemented outside industrialized nations. These included more robust and higher-yield cultivars (cultivated plant varieties), modern irrigation projects, synthetic fertilizer, and pesticides. The idea was to have farms become factories, with plants as the essential slave labor.

The Green Revolution’s sole focus was on the business of food supply, which is only part of the hunger equation. Food security – people’s access to food – remained shaky in neglected pockets throughout the world.

There is enough food for everyone. The problem is distribution. The quarter of the world’s population that live in industrialized countries eat half the food; and even in those countries, hunger is commonplace. Meanwhile, the poorest countries export their food to the richest. Plutocratic control guarantees chronic food shortages and bouts of starvation in Africa.

That hunger still occurs is a product of economics and politics, not a paucity of food production, or the means to deliver it. This is nothing new: selective undernourishment has been on the agenda of political regimes for millennia.

The Green Revolution reduced agricultural biodiversity. Its simplistic technological approach ignored the importance of soil quality, and the risk of susceptibility to disease in monoculture crops.

Synthetic fertilizer is a pollutant: damaging the soil and contaminating nearby freshwater and groundwater for a century or more after its last application.

Monocropping engenders the spread of agricultural pests and diseases, the threat of which is treated with yet more chemicals – all of which are poisonous to animals, and detrimental to Nature.

The Green Revolution expanded agricultural development into lands which were once unproductive. This spelled further environmental destruction. For example, seed varieties were developed that permitted cultivation in sensitive Brazilian ecosystems, which were deforested and stripped of natural wildlife to render cropland.

The Green Revolution set agriculture on an unsustainable path. Its techniques of monocropping and petrochemical dependence degraded the soil, producing better yields only in the short term.

Approaching the end of the 20th century, agricultural productivity slowed markedly. From 1950 to 1990, productivity rose 2% a year. From 1990 to 2000, yield growth was only 1%; a figure that continues to decline in the 21st century.

Land developed to grain production peaked in 1981 and has since declined as a result of environmental degradation. World cereal production plateaued in 1994. From 1999, world grain stocks have been on a decidedly downward trend.

From the section on Genetically Modified Organisms:

Genetics as a science dealing with the principle of heredity and variation emerged at the beginning of the 20th century. Its application to practical problems came decades later; but ignorance of genetics had not been a detriment to breeding advances. American horticulturist Luther Burbank had impressive success with varieties of vegetables and fruits without any knowledge of genetic principles.

Genetics has not been a godsend to agriculture: to the contrary. The application of genetics to food production has had negative environmental and health impacts. The ability to play God with Nature does not bode well when profit is the sole motivation.

Genetic manipulation of the food supply has been like that of a willful young boy, having found a box of matches, being bent on playing with fire. No human attempts at altering Nature have ever gone without unexpected consequences.

Pesticides, and even synthetic fertilizers, are excellent examples. Chemists did not anticipate the biological and environmental damage that they had brewed and set loose. It took decades to discover their folly.

After 3 decades, it may be too soon to adjudge the long-term environmental consequences of this unnatural naturalization. But the health implications of GMO are not sanguine, despite innumerable studies which spuriously contend that GM foods are safe. These studies universally rely upon phony statistics which confuse correlation with causation, and that is after positing statistically specious premises.

GM crops are the insidious introduction of poison into food. To pretend that such practice can be healthy for food consumers is absurd. One thing is certain about GM crops: they do nothing to improve yields. Genetic modification has proven a waste of resources as well as a hazard.

Spokes 6 covers the consequences of human endeavors. Spokes 7 explains how governance allowed the fruits of civilization to ripen.